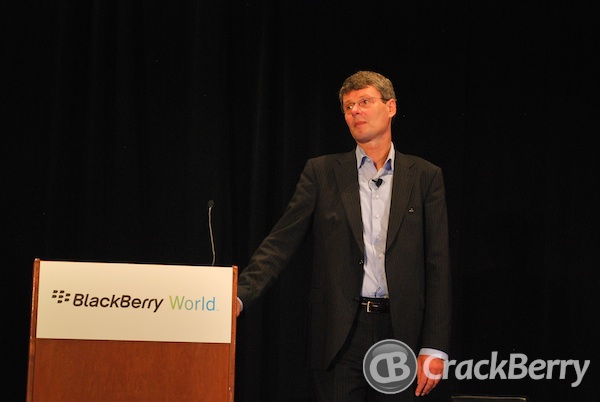 During the press session with Thorsten Heins at BlackBerry World 2012, the RIM CEO made note that they are honing in on hiring their new Chief Media Officer and Chief Operating Officer.

Heins couldn't give any detail on who will fill the roles just yet (still need to get those signatures signed on the contracts), but it was clear sitting in the audience that Heins was enthusiastic about who they are looking at bringing on board.

On the marketing front, Heins acknowledged they have spent a lot of time looking at how good they are at marketing their product and brand, and noted that in the past the messaging has been somewhat fragmented. Expect that laser-like focus Heins is bringing to the organization to manifest itself in the marketing message moving forward. Heck, even without a CMO, I'm a big fan of the BlackBerry is for Successful People message that was delivered during the BlackBerry World keynote.

The COO role was previously a shared role -- Heins was one of RIM's COOs before moving into the CEO role -- but moving forward this will be consolidated to one position.

During our initial interview with Thorsten Heins when he was still in his first week as CEO, he made it clear that changes would be coming to RIM's organizational structure. Today Heins delivered the message that those changes are complete, having established a management team that has his full trust and is committment.