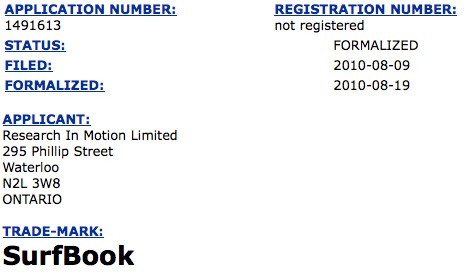 RIM has never been one to wait on things when filing for trademarks and patents. While waiting on any solid news up the upcoming BlackBerry tablet we've seen a few different names tossed around, of which "BlackPad "seemed to stick the most yet prove the most ridiculous. Well apparently RIM had filed for a trademark of the name "SurfBook"  in early August leading us to believe they may have made a semi-decent table name choice after all. There are no documented patents under the same name as of yet, but it looks like things are moving along in tablet land. So what do you think of the name "SurfBook"? Drop a comment with your thoughts.

Chatting with Kevin on this his thoughts are that it totally breaks their standard naming convention. Typically they stick with straight up, one word, one syllable names (Curve, Torch, Bold) so "SurfBook" seems a bit off -- but just calling it "BlackBerry Surf" wouldn't be bad at all and would fit much better with the current brands. Also, they would never cut their gabillion dollar brand name in half and use something like "BlackPad" (and BlackBerry BlackPad) is just wrong. Regardless of the name they go with, don't get your hopes up that you'll be seeing a BlackBerry tablet under the Christmas tree - early 2011 (late January if things go well) is where were thinking the release date is at now. Though that doesn't mean they won't announce it sooner. Fingers crossed we learn more about the tablet at DevCon next week.