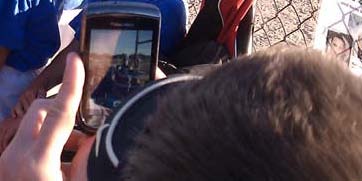 We'll let this one speak for itself really. You can take it all for what it is. A poster in the forums with a great story and a pic to go with it. Some will scream Photoshop, some will accept it. In the end, it is what it is. As the story goes from GoBlue in the forums:

A few weeks ago I was at my kids event and saw some person sporting a slider....no big deal I thought until I saw him slide it and saw the BB Logo....I asked him it that was the new BB Slider and he yep. Played with it a few, it was running 6.0. No idea what build. He basically said this would be out in November. I asked how he had and he is in public relations for RIM here in Chicago. I was a huge BB fanboy and if I had not gone Android, I would be creaming. The UI was nice, very smooth and FRIGGIN Fast. Again, I mean no disrespect, I can not answer any questions, just here to say those that are staying BB will definitely enjoy.

Was going to post this weeks ago, but had no proof, and well even with my post count, some would be skeptical. However, weeks later we were together at an "event" taking pictures of our kids after wining a "game" and just saw that I had a pic of it.

It is very small, feels very solid, and again if I had not experienced Android I'd want this phone.

And that's the tale of the spotted BlackBerry 9800. Pretty awesome. Considering I live in Halifax which has a RIM call centre, I've seen my fair share of pre release devices walking the street but, have yet to see a 9800 anywheres while out and about. All I can say is at least it wasn't left in a bar and appears to be getting some real world testing. Hopefully, we'll see a launch soon.
They say it's for science