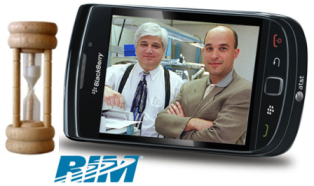 The tech and business world has been reporting on the value of a Co-CEO position at RIM for quite some time.  But the chatter really picked up steam with inventor Northwest & Ethical Investments LP called for the roles to be split up last month.  At the annual shareholders meeting this week in Waterloo there was to be a vote on this proposal, but Northwest withdrew their motion and have give the company 6-months to show that this shared CEO role can work.

The rational behind this current RIM hating is a mystery to me.  If the only measure of RIM was their market share position, than I would be at the front of the line wondering WTF the boys in Waterloo are doing.  BUT that isn't the whole story.

"But their market share is slipping and OS7 is just rearranging the deck chairs on the Titanic!" Well OK the BlackBerry has 40% smartphone market share in 2009, but total smartphones in the US as a percentage of all cell phones was only 19%.  So RIM had 40% of a 19% market.  Fast forward to 2011 when many are predicting that Ontario Hydro will turn off the electricity at RIM because they won't have enough money to pay the bills.  Smartphones now account for 40% of all cell phones in the US.  And RIM's share is down to 24.7%.  If I was running a business selling smartphones, I'd prefer 24.7% of 40% over 40% of 19% everyday of the week.

Is Waterloo the Garden of Eden?  No, of course not.  I believe that RIM does need to get things rolling and quickly, but the RIM Book of Revelations is not here either.  Kevin's RIMPIRE Strikes Back campaign is spot on and needs our support!  The BlackBerry platform is here to stay.