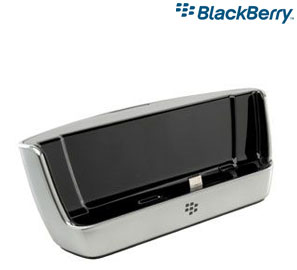 The official name of the Research In Motion (RIM) syncing and charging cradle for the Storm is the BlackBerry Sync Pod, though the accessory does much more than merely sync data between a smartphone and a PC. The BlackBerry Sync Pod also charges your Storm and acts as a cradle for better screen positioning while watching video clips or listening to music. And it automatically puts your device in speaker-phone-mode if calls come in while in use so there’s no need to remove the Storm from the Sync Pod to answer.

For the most part, the Storm Sync Pod delivers on RIM’s promise to provide a stylish and effective new way to transfer data, music, photos, and videos back and forth between your Storm and a PC.  But the lack of such features as an LED or other indicator to signal when syncing and/or charging are complete hinder its overall performance.

The BlackBerry Sync Pod is a worthy addition to any Storm owner’s accessory arsenal, but it’s far from perfect. Hit the jump for my reasons why.

In Sync – The Good Stuff

The best thing about the Storm Sync Pod is its appearance, and the fact that it truly compliments the design of the already-stunning BlackBerry Storm.  The Sync Pod was clearly created with the Storm aesthetic in mind, as its long lines and smooth curves match the device perfectly. RIM really hit the nail on the head with the BlackBerry Sync Pod’s looks; whether the Storm’s in place or the Sync Pod’s empty on your desk, it’s sure to grab eyes.

Like the Storm, the Sync Pod is not only pretty, it’s functional. In fact, I was able to perform every single data transfer task I attempted on the Storm, with the exception of a manual data backup via PC and BlackBerry Desktop Manager v4.7. However, I was also unable to perform this type of backup using just a micro USB cable and no Sync Pod, so I believe the problem is related to the buggy beta OS I’m currently running (v4.7.0.90) and not the pod. I was able to sync music (via BlackBerry Media Sync for Mac), transfer photos and videos and upgrade my Storm’s OS (via Desktop Manager) all using the BlackBerry Sync Pod.  The data backup even worked via Sync Pod when I performed it as part of an OS update. And I added the Facebook for BlackBerry and Flickr apps to my Storm via Sync Pod, by using RIM’s online application loading process.

A Look with the Storm Docked in the Pod

The Sync Pod doesn’t block any important ports or other Storm components while the device is in place, though it does plug into the Storm’s microUSB port and its convenience key is blocked when the pod’s in use.  If charging/syncing, your Storm automatically turns on its speakerphone when a call comes in if you answer without undocking the device. This features works well, but the Storm’s less-than-impressive speaker means audio quality is hollow and weak.

The BlackBerry Sync Pod doesn’t increase the overall BlackBerry Storm power-up time; it takes roughly three and a half hours to charge a completely dead Storm standard battery, whether you’re using the Sync Pod and an AC travel charger or the travel charger alone.

The Storm Sync Pod is well designed for watching video or navigating through music collections with a device is in place; when in the pod, the Storm sits at roughly a 110 to 120 degree angle to the surface it’s on.  And your device automatically goes into Bedside Mode, turning the Storm into a clock, whenever it’s attached to a power source. I wish the BlackBerry Sync Pod had a swivel-hinge built-in so you could adjust the Storm viewing angle while the device is in the pod, but the default angle works well enough.

I’m familiar with RIM’s BlackBerry Desktop Charging Pod for the BlackBerry Pearl and Curve, and while these products are similar in design to the BlackBerry Sync Pod, the new Storm cradle blows them out of the water when it comes to functionality. First and foremost, that’s because the Sync Pod can sync data, while the older models were meant strictly for charging. It’s also significantly larger, which means more gripped-rubber on its base, so it sits more sturdily on your desktop.

Out of Sync – The Not-So-Good Stuff

The first negative thing that jumped out at me about the BlackBerry Sync Pod is the fact that it does not come with an AC charger or a micro USB sync cable. In fact, the Sync Pod doesn’t come with anything else, but a thin sheet of instructions and the bubble wrap it’s packed in. This seems slightly more acceptable to me when I consider the Shop.CrackBerry.com price of $29.99. But RIM is asking for $50 for the pod in its store. For $50, you ought to get both a new travel charger and a micro USB sync cable.  Even at $30, the BlackBerry Sync Pod should ship with at least a new USB sync cable.

Secondly, there’s currently no simple way to determine when your device is finished charging or syncing without physically touching the device and checking the battery meter.  There’s a small, thin panel on the top of the BlackBerry Sync Pod that lights up when it’s plugged into a wall outlet or your PC. But the panel only glows white, and it doesn’t turn off when data transfer or powering up is complete. (It’s also not visible from the front when the device is in place, but that’s really a non-issue since the panel doesn’t do much anyway)

Bottom of the Sync Pod

The product would be more valuable if there was an LED or other indicator that signaled when a sync or charge was complete. More specifically, the BlackBerry logo on the front of the Sync Pod—which currently serves no purpose other than branding—could glow when your Storm’s charging and then turn off when it’s done. And the logo could glow another color during data syncing and turn off when complete.

One of the reasons the Storm stays in place so well while seated in the BlackBerry Sync Pod is the fact that the fit is so tight.  The Storm slides down into the Sync Pod and there’s little room for movement. That’s a good thing and a bad thing: It’s a good because your Storm largely stays put once placed in the pod; but it’s bad because the Storm won’t fit in the BlackBerry Sync Pod when equipped with any sort of skin, case or larger, third-party battery.  Not even the thin, OEM skin RIM makes for the Storm will fit into the Sync Pod. This may not be such a big deal for folks with simple skins like RIM’s, but Storm owners with protective cases like the OtterBox for Storm will want to steer clear of the Sync Pod, unless they can deal with repeated removal and replacement of their cases.  External batteries that add bulk to your Storm, like Seidio’s 2600mAh battery, will also need to be removed before the device fits in the Sync Pod.

The BlackBerry Sync Pod’s footprint is rather large, so make sure you’ve got room on your desktop or bureau before picking one up.  And the shiny, onyx-like surface inside the pod, where the Storm sits, seems to scrape easily—though the shiny silver outer is much more scratch-resistant.

It’s also worth noting that RIM’s ShopBlackBerry.com says the BlackBerry Sync Pod is compatible only with the Storm 9530 device, though I can’t confirm this, as I don’t have any others Storm models, such as the 9500.

The BlackBerry Sync Pod for Storm is a great-looking and functional accessory that each and every Storm owner could benefit from. The pod makes charging and syncing data between your BlackBerry Storm and a PC simpler and more fun.  And it serves as a great-looking and effective holder for your RIM smartphone when you’re watching video, listening to music, taking speakerphone calls or using it as a bedside alarm clock.

And at just $29.99 from the CrackBerry Shop, your wallet won’t feel too much lighter after the purchase.

While the Sync Pod does everything RIM promises, its lack of such basic features such as a charge/sync progress indicator, and the fact that it doesn’t come with a spare travel charger or even a sync cord, mean the product’s less valuable than it could be with just a couple of minor design modifications.


Al Sacco is a staff writer with CIO.com. His Mobile WorkHorse blog was recently nominated for a Jesse H. Neal Award for excellence in business journalism.