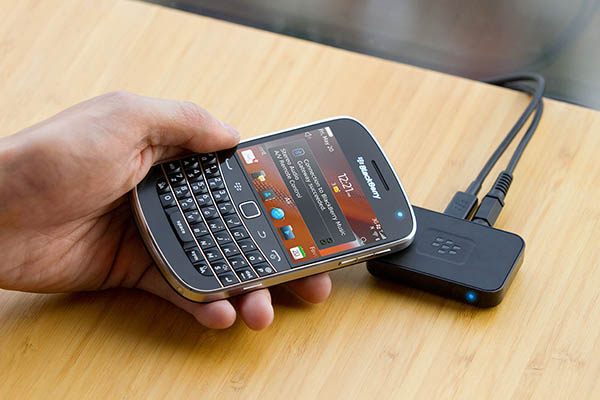 Update: The BlackBerry Music Gateway is Now Available from ShopCrackBerry.com!

A few years back, RIM introduced the BlackBerry Remote Stereo Gateway for streaming audio via Bluetooth. For whatever reason, that accessory is no longer available to purchase. Today RIM is introducing a new version of this awesome device, dubbed simply BlackBerry Music Gateway. Plan on getting your hands on this hot little device in June of this year with pricing said to be set at just $49.99. We'll have a hands on later, but for now you can find out all the details in the press release below.

The showcase will also be open for the duration of BlackBerry World. Stop by for a demo and take a look at all it has to offer:

Getting music on your BlackBerry has never been easier. Customers can sync their personal music library, purchase albums and songs from the BlackBerry Music Store or stream music from the numerous BlackBerry App World™ music apps such as BBM™ Music, Pandora or Slacker, for a rich multimedia experience.

The BlackBerry Music Gateway will begin shipping in June 2012 and will be available for US$49.99.

*Bluetooth enabled devices must feature the A2DP and AVRCP profiles.

** For tap to pair and connect feature, device must feature Near Field Communication (NFC).