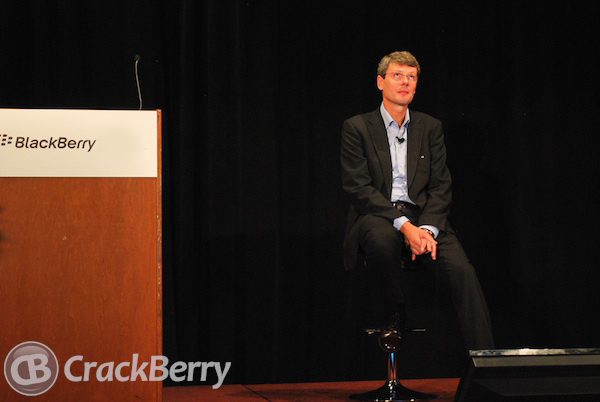 Yesterday RIM went on a bit of a media blitz - at least in Canada. CEO Thorsten Heins published an op-ed in the Globe and Mail (reposted here). He also did a radio interview with CBC, as did Andrew McLeod, RIM's Managing Director of Canada.

Rick Costanzo, RIM's executive VP of global sales, was also busy giving interviews to the media. You can catch Kevin's 15-minute interview with him if you haven't heard it already.

I give RIM credit for putting itself out there. I can't recall the last time a struggling company's CEO wrote an article about the firm's position in a national newspaper.

Unfortunately, that's about where I run out of really nice things to say. I think yesterday's media outreach was not well enough planned out, and the executives who gave interviews did not prepare well enough.

From good to bad

In Orlando this past May, for BlackBerry World, Thorsten Heins did a great job. He presented clearly at the keynote and then followed up with a hit presentation to the media the next day. His clarity and ease in answering questions (mostly pre-emptively) was beautiful.

Then came the Q1 conference call last week. We knew the numbers would be bad. But I wasn't expecting the communications disaster we witnessed. In my opinion, Thorsten's prepared remarks were poorly written. And then, during the Q&A session, the team came across less-than-prepared to answer some of what should have been highly anticipated questions.

In particular, the discussion around the delay of BlackBerry 10 lacked the kind of clear messaging that Thorsten had done so beautifully in Orlando.

It's time to stop trying and start doing

Earlier on I used the sub headline "at least they tried". Many years ago I learned that try implies failure. Executives should cut the word "try" from their vocabulary, and never use the word in interviews or prepared remarks. When we "try" we give ourselves an excuse to fail and then say, "Well, at least I tried".

RIM is trying to communicate. But they need to stop trying and get expert at delivering a strong message. To do this requires deep knowledge of the types of questions that will be thrown at them, and to rehearse the living hell out of the answers. In any 10 minute interview if you are asked two questions that you don't have a well-rehearsed answer for, you've not done a good enough preparation job.

RIM executives are certainly busy. But if they are too busy to adequately prepare for a media blitz, they should not be doing one. Period.

What did RIM really want to say anyway?

What RIM really wanted to get across yesterday is the significance of the business transformation they're going through. They want us to understand that they started almost two years ago to rebuild a completely new platform. It's more than just a new OS for a phone. It's an entirely new platform that RIM expects to take it through the next decade of mobile computing.

They can't afford to simply play catchup to the current market demand for iOS and Android devices. They need a platform that goes beyond it. Building this takes time, and they aren't going to skimp on quality to rush it out the door.

That was the most important part of what RIM wanted to say. But the message got too diluted by weaker (even defensive) comments.

I'm not saying that the quality of communication with investors and the media is an indicator for the quality of upcoming products. It isn't. RIM could completely blow press interviews and still deliver a great new platform. But it's a lot easier to rally the troops if the media isn't bashing you. That's why companies in tough competitive positions (and losing money) need to be even stronger at communicating compared to perceived leaders.

I'd like to hear from the CrackBerry community. What parts of the RIM message did you like yesterday? Which parts came across as defensive or irrational?

I'll get the discussion going with a few specific thoughts:

I have high expectations for BlackBerry 10. And I have equally high expectations for the executive team at RIM to become expert communicators. The RIM of the last decade has never been particularly good at communicating. In fact, one reliable source actually told me that Jim Balsillie never even used to read through his prepared script for quarterly conference calls ahead of time. The first time he would read them would be live on the call.

The time is now for RIM's executive team to become masterful presenters. They need strong, congruent presentations to win them as many points as possible with the public and the media.

Next week RIM holds its Annual General Meeting (AGM) of shareholders in Waterloo. They'll be streaming the event live, and the media will be paying attention, as will shareholders.

Thorsten - it's time to start rehearsing. It's time to set an amazing example for the rest of your executive team. If RIM is going to have laser-like focus, show us through your communication. We'll still be here cheering for the home team.