We first told you about Viper SmartStart back in January at CES, and then just last month, the BlackBerry application was released for download. Well this month, I'm going to take it one step further and give you a review of the BlackBerry SmartStart App, and how it works with the Viper alarm system in general.

The good people at Directed Electronics were nice enough to supply me with a Viper SmartStart alarm system to review. The alarm itself has to be professionally installed, and this was easily done by a local authorized Viper installer. I took my vehicle in around 8:30am, and I was called by 2pm that it was ready. It takes most of the day to have the system installed, so if you're planning on getting one, prepare to be without your car for most of the day. Once my system was installed, the installer gave me a demo of the system, and helped me set up my account and activate the SmartStart App on my BlackBerry Bold 9700.

The SmartStart App is basic and simple, but does exactly what it needs to do. Once the app is launched, the user is presented with options, to lock, unlock, trunk release, panic button, and of course SmartStart. These are the same functions present in the included key fob remotes. 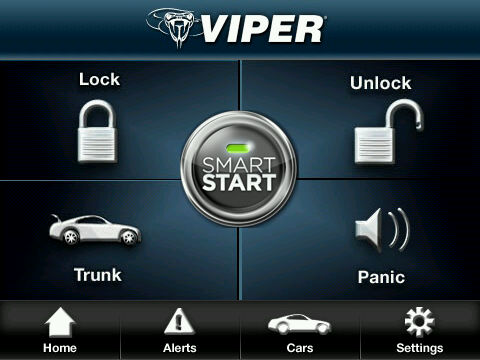 In order for the SmartStart App to work, two things must be present; your BlackBerry must have cellular and/or Wi-Fi service, and your vehicle must be in a location where it has a cellular signal as well, specifically it runs on the AT&T network. As long as both conditions have been met, you can use your BlackBerry to control the alarm functions and remote starting of your vehicle from anywhere in the world. Now will you really have a need to remote start your vehicle from across the world? Probably not, but being able to remote start from within a shopping mall would be a nice feature. I live in Texas and our summers are quite warm. The luxury of having a remote start to cool down my vehicle before I get in is absolutely fantastic.

Many of you are probably worried about the security of your vehicle at this point. Let me help put your mind at ease. The Viper SmartStart system will allow your vehicle's engine to run for 20 minutes only before it will shut down if you have not entered the vehicle and placed the key in the ignition. If anyone were to enter your vehicle when you had it remote started, the alarm of course would activate, but not only that, as soon as the person attempts to shift your vehicle into gear, the engine will die. There must be a key in the ignition before someone steps on the brake pedal or the engine will die.

I talked a little earlier about the alarm going off if someone were to mess with your vehicle, or attempt to steal it. Wouldn't it be nice to know when something like that was happening? It just so happens that the SmartStart App will also send alerts to your BlackBerry whenever there is an alarm activation. Now isn't that fancy?!?

How many of you are wanting to get this now? Well here comes the catch... the price tag. If you don't already have a compatible Viper secuirty system, you'll need to get a full install. The price ranges, but plan on spending at least $500 to purchase the system, and then you'll possibly have install fees on top of that. Once you have a system installed, there is a $29.99 annual fee for the vehicles cellular system, but the good news is that the first years fee is covered. If you did purchase a system, and then decided to stop paying the annual fee, you're system will still work with the included key fobs, and they have a surprising one-mile range.

Anyone else using this system? Let us know in the comments.