"Yo dawg, I heard you liked to PlayBook, so I put your PlayBook in a play book so could PlayBook while you play book." 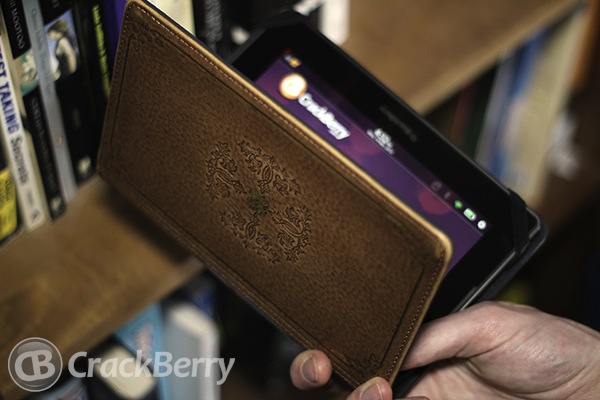 LightWedge's Verso covers caught my eye at CES as a classy alternative to the usual flip covers available for the BlackBerry PlayBook. While the gimmick of putting book binding on a mobile gadget isn't new, I was particularly happy that LightWedge's take on it was truly universal. This particular version is the Prologue Antique Cover in tan, but they've got a whole bunch of different styles with the same basic idea.

Many accessories are built for specific devices, but the Verso cover uses a simple, clever elastic band brace that can fit a wide variety of devices, while keeping them all snug and secure. In addition to being available in a wide variety of book styles (including this snazzy red version), it's also available in large 10-inch size if you happen to own a bigger tablet.

Print may be dead, but literary pretensions don't have to be!

There's a pocket in the inside sleeve which is pretty tight, but big enough to fit a few errant pieces of paper. Even though it's not particularly designed for it, the Verso cover functions reasonably well as a stand. When folded all the way backwards, the PlayBook and cover are perfectly fine for one-handed use.

In a pinch, the Verso Antique Cover can double as a stand

There are a few downsides, mind you. If you're prone to using the rear camera a lot, you'll need to take the whole device out to take your shot. The Verso case also offers little in the way of impact protection, since all four sides are exposed, but this also means that you have easy access to the PlayBook's various inputs. Even the side facing the binding really doesn't have much cushioning (though there is enough room to plug into the headphone jack when the flap is closed). The main thing you'll get out of the Verso Antique cover is scratch protection.

When folded right back, the cover and PlayBook fit nicely in the hand.

While the cover looks nice and weathered, it's not real leather, which may be a bone of contention with sticklers for authenticity. Along those lines, the inside had this really harsh synthetic smell that stuck around for the first couple of days of use, but at this point I'm just nipicking.

The inside pouch is pretty tight, and hard to fit more than a couple of sheets of paper inside.

In the end, the Verso Prologue Antique cover is stylish enough that I'm actually eager to bust out the PlayBook in public; normally, I hate being the douche on the bus who thinks he's too good for a real book. By putting the PlayBook in a familiar wrapper, you're not only normalizing something that's pretty futuristic, but you're also making a sly tongue-in-cheek reference to your tablet of choice. I'd reccommend the Verso cover to anyone who places style first in their PlayBook accessories - especially if you're an avid reader.

Verso Antique Prologue Cover for the BlackBerry PlayBook
by LightWedge