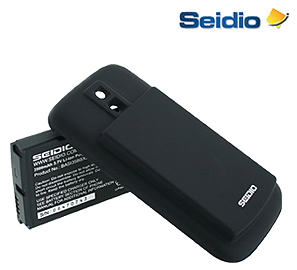 The BlackBerry Bold 9000 , Research In Motion (RIM)'s high-end, 3G smartphone is a stunning and impressive device on many levels. Unfortunately, battery life is not one of its strong points-I consider myself lucky if the Bold makes it through a full day without a charge.

In the past, BlackBerry devices were lauded for their outstanding battery life, and anyone making the switch from an older device, such as an 8700 or an original Pearl 8100, to the new Bold is sure to notice a drastic change. That decreased battery life is due largely to the Bold's 3G support (GSM/UMTS/HSDPA), Wi-Fi and power-hungry 624-MHz processor. But thanks to accessory maker Seidio and its line of batteries for the BlackBerry Bold, the ability to go 24 hours or more on a single charge is easily within your reach.

Seidio currently offers two batteries for the Bold 9000: the Innocell 1650mAh Extended Battery, which is almost the exact size and shape as the battery that ships with the Bold, but with slightly more power storage capacity; and the Seidio 3500mAh Extended Battery with door, which provides more than double the battery life of the standard Bold battery RIM, according to Seidio, but also requires a separate battery cover.

I wanted the most Bold-battery-bang for my buck, so I reviewed the 3500mAh battery pack. (For more on the smaller, 1650mAh Seidio battery for Bold, read "In Stock: 1650mAh OEM Size Extended Battery for the Bold") And though it certainly delivers on its promise to double the battery life of my BlackBerry Bold, the extended power comes at a hefty price-and I don't just mean the $59.99 you'll need to scrounge up to purchase it. Read on for my explanation.

The Battery Is Half Full (The Positive)

The best thing about the Seidio 3500mAh li-ion polymer battery pack for the Bold is the fact that it does provide almost double the life of the standard, 1500 mAh li-ion battery that ships with the device. In my tests, with AT&T 3G enabled, full cellular coverage (all five bars) and Wi-Fi and Bluetooth turned off, I got just over eight and a half hours of talk time using the Seidio 3500mAh battery. Compared to the talk time offered by the standard 1500mAh Bold battery, which amounted to almost four and a half hours of talk time using the same settings, that's an increase of nearly 100 percent.

The instructions that came along with the 3500mAh Seidio battery state that for the product's optimal performance, you should charge it for at least eight hours the first time you use it, which I did. The company also says that battery life should increase after five or six charges, though I cannot confirm this. I've fully charged and drained the battery roughly half a dozen times since I received it last week, and I can't say that I've noticed any significant change in battery life thus far.

Since, I'm not at all a fan of the faux-leather battery cover that ships with the BlackBerry Bold, I really appreciate the battery door that comes with the Seidio 3500mAh battery-though its size is not ideal. (More on that in the next section.) The Seidio door is black with a dusted, matte finish, and it's much better looking than the standard Bold battery door, at least in my opinion, except for its "bulge." And there are spaces or openings for every port and speaker vent, as well as both the camera and flash, just as there are in RIM's Bold battery cover.

And considering the 3500mAh Seidio battery sells for $59.99, just ten dollars more than the 1550mAh Seidio option-and it comes with a new battery door-it's probably your best buy when it comes to extended batteries for the BlackBerry Bold.

The Battery Is Half Empty (The Negative)

The obvious downside to the 3500mAh Seidio Bold battery is the fact that's significantly larger than the battery pack that comes with the device, and therefore, it requires a special-and some might say, awkward-battery cover. As stated above, the battery door comes with Seidio's 3500mAh battery, so you don't need to buy it separately; however, it really does change the overall look and feel of the BlackBerry Bold, and that in itself might be enough to deter some users who really appreciate the device's aesthetic.

It's worth noting that the Seidio Bold battery door literally reeked of toxic-smelling paint when it first arrived, which I did not appreciate. But after a few days of use, the smell decreased so it's barely noticeable anymore. The door itself is also a serious pain in the ‘Berry to remove; I had to use a thin piece of plastic or thick paper to wedge between the cover and my Bold every time I wanted to remove it.

To be honest, the extra bulk of the 3500mAh battery-in both size and weight-doesn't bother me much. In fact, I expected not to like the product at all for this very reason, but I'll admit that it's not as bad as I had anticipated. The 3500mAh battery is roughly the same height and width as the standard Bold power pack from RIM, but it's more than twice the thickness, hence the need for a custom battery door. It also weighs a few ounces more than the RIM battery, which means the already slightly-hefty Bold is even heavier with the Seidio battery intact.

Under the hood - the Seidio 3500mAh adds size, but also extra power

The one true deal-breaker for me is the current lack of available skins/holsters/protective cases that fit my Bold with the 3500mAh battery in place. Because the battery protrudes from the rear side of the Bold, standard Bold skins from RIM and other accessory makers like OtterBox, simply don't fit. Even the OEM leather holster that ships with the Bold is rendered useless by the extended Seidio battery. I'm obsessive about keeping my Bold protected, so this is huge for me. True, you could use something like a BodyGuardz "skin" to protect your 3500mAh-battery-equipped Bold from scratches, but your device would still be open to shock-related damage.

Seidio really needs to release a skin, case, holster, or all three, to go along with its 3500mAh battery and replacement door. Even if such a product was sold separately, I'd buy it.

Finally, though the Seidio 3500mAh extended battery for Bold does indeed provide significantly more battery life than the standard Bold power pack, as advertised, it also takes twice as long to fully charge: About six and a half hours. For folks who charge every night while they're sleeping, this won't be much of an issue. But don't expect to re-up this bad-boy in one quick sitting.

Conclusion: To Extend Your Bold Battery or Not to Extend?

I'll sum my review up like this: I'd be using the Seidio 3500mAh Extended Battery with door for BlackBerry Bold 9000 as my everyday battery if only the company, or another enterprising accessory maker, would offer a skin or case that was meant for use with it and that fit perfectly regardless of the battery bulge. Because there's currently no such thing, and I'm not willing to employ a generic case or holster that wasn't meant specifically for my device, the Seidio 3500mAh battery has found a new home in my desk drawer.

The battery itself works as advertised, delivering significantly more battery life than the standard Bold battery. If longer battery life is more important to you than ensuring your device remains in pristine condition, and you can deal with the additional size and weight, you'll find a friend in Seidio's 3500mAh Extended Battery with door for the Bold.

Right now, Seidio's Innocell 1650mAh Extended Battery for the BlackBerry Bold is a more suitable option for me, as it provides slightly more battery life than the standard RIM Bold battery, costs ten dollars less than its larger sibling, and it doesn't require an additional battery door.


Al Sacco is a staff writer with CIO.com. His Mobile WorkHorse blog was recently nominated for a Jesse H. Neal Award for excellence in business journalism.