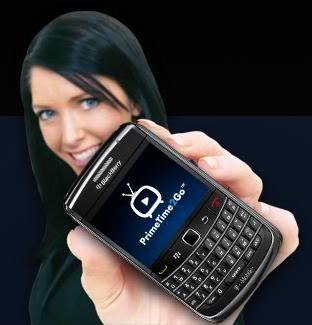 Some of you may remember the review I did of PrimeTime2Go last year. The service has been progressing since last May, and now comes pre-loaded on the T-Mobile Bold 9700. PrimeTime2Go offers over 60 prime time programs, and comes with a carrier billing option on the T-Mobile Bold 9700 for $9.99/month. Unfortunately, there are still very few BlackBerry models supported by the service, but more devices are being added as they can be supported.

As of my last review, PrimeTime2Go was still in its infancy, and was experiencing some growing pains. As of this review with the T-Mobile Bold 9700, it seems that they have worked out some of their intial bugs, and made the software more usuable.

The basic interface of the application is much like when it initially launched, and all downloaded programs are still stored on the devices microSD card, and can only be played through the proprietary media player within the PrimeTime2Go application.

View your programs ready to be played

Get a brief description of the episode to be played

I found the built-in media player to be acceptable, but it is lacking some basic features like fast forward and rewind. You are able to play, pause, and go back to the beginning, but if you missed a part of the show due to a distratction in the room, you're just out of luck unless you want to start the show over again. I did address this concern with QuickPlay Media who created the software, and they promise that more control will be released on future builds of the app, but unfortunately I have no release date for that at this time.

Picture quality is absolutely awesome. When the service originally launched, many users were discovering that their recorded programs would occassionally have a pixelated look to them on playback. I have yet to see this happen with the new build on the Bold 9700, and I'm hoping that it never does. Another great feature that is available only on the T-Mobile Bold 9700 is show previews. Previously, there was no way for a user to get a trial or sample of what the program was like. Your only choice was to subscribe, and then check things out, and if it wasn't acceptable, you had to cancel your paid subscription. The ability to check out previews still isn't as good as a trial period in my opinion, but it is a step in the right direction, and now you can at least see a brief glimpse of the content and quality of the programing.

I have discovered a few small issues with the program. My first problem was when I was flying home from CES and tried to watch some of my recorded programs. Everytime I attempted to play any one of my recorded shows, the app would give me an error and state the show was not available for viewing. I tried the old battery pull method of BlackBerry repair, and low and behold my problem was fixed. The other issue I discovered was when I was attempting to watch an epidode of Grey's Anatomy. Anytime I tried to access any of the user functions like pause/play or full screen, the app would become unresponsive, and nothing would work anymore. My only solution was.... You guessed it... A battery pull. I could watch other shows just fine, but that one particular episode just had a glitch. Again, I spoke with QuickPlay Media about the glitch in Grey's Anatomy, and was told that there had been a reported problem with an episode of Grey's Anatomy where the encoding was causing a viewing issue. They pulled that episode as soon as they were aware of the issue, and replaced it with a new version that worked. While that is fantastic the episode was fixed, it would be nice to have some kind of notification system in place that could email subscribers when there is an issue with an episode and notify them that a fix has been implemented.

Overall, I think PrimeTime2Go has come a long way since launch last year, and has made many improvements. For users on T-Mobile with a Bold 9700, this may be a great option for you to watch many of your primetime TV shows. As this service evolves, I can see users begin to dump cable/satellite TV services and move all their TV viewing to striclty mobile/internet services.

To get more information on PrimeTime2Go, jump over to their website and read through the Support/FAQ's. If you have any questions for me, leave them in the comments and I'll do my best to answer them.