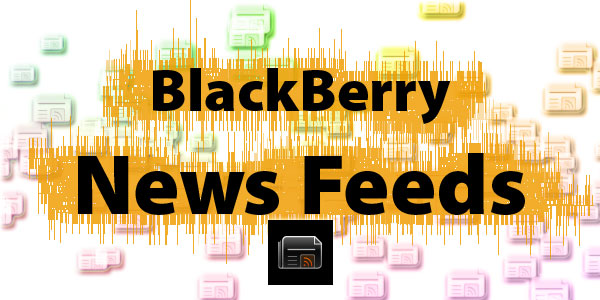 Last week, Research in Motion released its News Feeds to the United States and Canada. In March of 2010, RIM acquired app maker Viigo; makers of the number one RSS reader apps. News Feeds seems to be the first direct fruits of that effort. The app is very reminiscent of the Viigo news reader; you can even import your Viigo news feeds into the new app.

Though the app works well and new feeds are simple to add, it lacks the visual appeal that newer OS6 applications have. The Social Feeds app does a much better job of presenting and navigating news feeds. But then again, not everyone can run OS6 on their device. For these people, News Feeds is a quality piece of software. For others, the simplistic style and stoic visuals will be a turn-off.

Adding feeds in News Feeds is made easy by a searchable list of news feeds. Just type in what you want to search for, and you'll get a long list of news feeds. Feeds are also organized into categories. Kudos to RIM for including CrackBerry.com and other blog feeds right at the top of the list in the BlackBerry category. No list can contain every RSS feed, so new feeds can be added by entering the feed URL in the search box.

In contrast, adding new feeds to Social Feeds is both more difficult and much easier. Social Feeds does not provide a searchable, categorized list of feeds. All you can do is enter a URL. Where Social Feeds shines is its ability to add feed directly from pages in the web browser. This feature is only available in OS6 and may not be possible in OS Five. Still, it makes things a lot easier when you don't have to copy and paste.

I really like the ability to know what news items I have and have not read. It's one of the things missing from Social Feeds. News Feeds handles this and will even alert you when new news items have been loaded. But this functionality comes with a bit of limitation. News Feeds will display up to two lines of the article title in the feed view. To me, this actually results in a cluttered display; since there are no favicons (those little icon identifiers that websites use) and all of the titles are the same size. Visually, it's difficult to tell where one article ends and another begins.

Finally, there's no swiping. Now granted, users on BlackBerry OS versions 4.6 - 5.0 generally don't swipe through their messages. Those who have been getting accustomed to OS6, will find it sorely missing. Swiping left and right to access the next and previous news item or feed is something I've become addicted to. It makes sense. Swipe instead of backing out of the article and selecting the next one in the list.

For users of BlackBerry OS 4.6 - 5.0, News Feeds should be a welcome upgrade from previous Viigo versions. The app handles RSS feeds in a simple - but effective - manner. But for me, having become accustomed to using the RSS feeds in Social Feeds, News Feeds seems a step in the wrong direction.

If RIM would build an RSS reader that combines the read/unread messages, the grouping of articles by feeds, and the searchable index of News Feeds with the visual style and "swipiness" of Social Feeds, that would be my ultimate reader. Throw in access to Google Reader, and they'd really have themselves a winner. What do you think? What do you look for in an RSS news reader? Comments are now open.

BlackBerry News Feeds is available to many devices running OS 4.6+ in the United States and Canada.