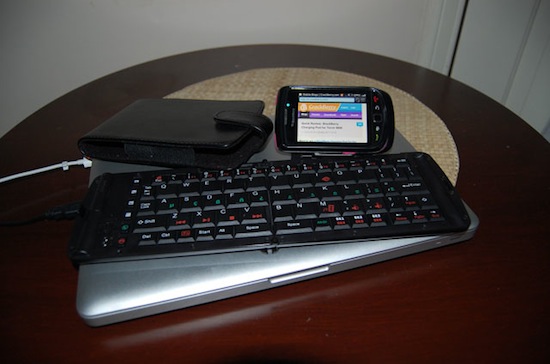 In looking to lighten my daily load when travelling to and from university, I wanted to leave my Macbook at home and just use my BlackBerry. It was fine for a while until I had to start writing essays and pages and pages for coursework. The Torch keyboard wasn't going to cut it. Of course there was the option of using the university computers but you weren't always guaranteed to get one so I had to get myself a bluetooth. That's when I got the Freedom Pro Bluetooth Keyboard. Small and light enough to join my books and notebooks and not kill my back while doing so. In fact, most of this article was written using the keyboard with my BlackBerry Torch. So, let's see how it faired with daily usage.

In order to use the keyboard, you first have to install an app, which could be downloaded over-the-air. Once you have this, just pair the device via bluetooth as you would any device. When you have both devices paired, you're ready to go. The first time you use it you have to manually connect it by launching the app you installed. You then have the option to have the BlackBerry automatically connect to the keyboard whenever you turn the keyboard on. I have mine set to auto connect and the speed at which the two devices connects varies upon each use. Sometimes they would connect instantly after turning both my Bluetooth and the keyboard on. Other times it would take a little longer to connect. There were times when it got even more frustrating and would not connect so I had to go in and connect manually. However, after testing it out on another BlackBerry device (_Storm2_http://crackberry.com/blackberry-storm-2) I found that this was not the case. So, it could just be an issue with the Torch. After contacting support they told me this should be the case but couldn't offer a solution. It seems other Torch users have had this problem too. Let's hope a future update could fix this.

Using the keyboard took a bit of getting used to. By that I mean I had to get used to the awkward position of the spacebar and the fact the was a gap in the middle where the keyboard folds, so reaching for the letter ‘B' became a little struggle at first. Since I was using it daily it didn't take long for my fingers to get used to it. As already mentioned most of this post was written using the keyboard, with just the final edits finished on the laptop.
The keys are smooth and travel well. You could easily punch out your emails and word docs in no time. I found myself getting on with essays very nicely and easily. The full-sized keys give for a very comfortable typing experience.
The only thing that bugs my is that sometimes there a bit of lag. You could be typing a whole sentence and nothing shows up until several seconds later. It can annoy, especially when you're on a roll typing away. Broke my flow a few times but it doesn't happen too often.

There are a number of shortcut keys available on the keyboard that allow you to launch apps on your BlackBerry device without having to actually touch your BlackBerry. There are the SK keys that will work just like the BlackBerry button, select key and back key and convenience keys. You can define 12 shortcuts to launch your favourite applications which can be set through the Freedom Pro app. Down the left side of the keyboard you have 6 dedicated shortcut keys for: Messages, Contacts, Tasks, Calendar, Answer call and End call. There are also default shortcuts to load the Browser, control media, volume and go back to the Home screen. This makes things a lot more convenient, giving you quite a lot of control from the keyboard.

The keyboard has 75 full sized keys arranged on 5 rows. It comes with a detachable device stand which can be adjusted by height, which is foldable to tuck away nicely into the keyboard for storage. The device stand feels sturdy and has rubber panels so your device does not slip off. The keyboard itself feels quite solid. The keys have enough travel in them and don't feel flimsy. There's also a lock so that it does not fold while you're using it. Not that it will if it's sitting on a table but the option is there. It comes with a leather pouch for when you need to store it in when travelling around which is a nice bonus. It is powered by two AAA batteries that come included. I haven't had to change them yet, with constant use for a month or so. There are even four small rubber stands on the outside of the keyboard for stability while using the keyboard and so your keyboard doesn't get scratched by the surface.

My overall thoughts on the Freedom Pro Bluetooth Keyboard are positive. It served me well for the purpose I needed if for. Basically does what it says on the box. The 12 definable shortcut keys are an awesome bonus but remembering what app is assigned to what number can take a while to get used to. If you use them often enough, of course this wouldn't matter. Due to it's full-sized keys however some may see the keyboard as a bit too big, especially compared to other Bluetooth keyboards in the market but if you're looking for a reliable keyboard that gives you the best typing experience I would recommend getting one. Definitely allows you to get a lot more done than using your BlackBerry keyboard alone.

The Freedom Pro Bluetooth Keyboard is compatible with BlackBerry devices running OS 4.0 and above. Regular price is $129.95 but is currently available for $119.95 from ShopCrackBerry.com.