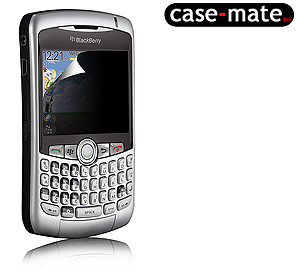 There are countless reasons why BlackBerry users might desire some extra privacy. A businessman checking his e-mail during a flight could want to shield his device from the prying eyes of the curious teenagers seated around him; or on the flip side, one of those same teenagers might not fancy the guy in the suit with the 8830 watching as he attempts to make BrickBreaker history.  Average Joe BlackBerry, who's peeping the latest Kim Kardashian celebrity BlackBerry sightings at work, just might like to keep that to himself.

Whatever the motivation, Case Mate's Privacy Screen Pro, which sells for $14.95 at ShopCrackBerry.com, promises to help ensure that whatever you may be doing with your BlackBerry remains your own business.  According to Case Mate, the screen provides enhanced device security by blocking display visibility from any angle that's more than 45 degrees, horizontally or vertically, from the center of your display. This holds true based on my experiences with the product.  On the whole, the privacy screen does exactly what it's supposed to and more.

Though I was a bit skeptical at first—I love the brightness of my display and didn't want to do anything to affect that—the screen has been on my BlackBerry Curve for more than a month now.  It's not perfect, though, and if applied carelessly at first, it may never fit correctly or stay put again.  Is the Case Mate Privacy Screen Pro for you?  Read on for an answer.

But first, some quick product information from Case Mate:

When I first removed Case Mate's Privacy Screen Pro from its minimalistic packaging—it comes in what looks like a few pieces of decorated cardboard folded over onto each other—I couldn't help but think, "This is it?" The privacy screen is 2 inches by 1.6 inches when new. It comes with only a tiny piece of graph paper to help fit it to your screen, a cloth for cleaning your display before application, and a "soft applicator card" that's really just another piece of small, stiff cardboard that can be used to exile any air bubbles that make their way between the screen and your display during installation—though my American Express card did this job more efficiently.

It didn't take long, however, for me to realize that good things really do come in small—and in this case, thin—packages.  After a few days of getting used to Privacy Screen Pro, it was clear that even though its purpose is obviously to increase BlackBerry users' privacy, it also serves as a very functional screen guard.

Initially, I had trouble getting the privacy screen on just the way I wanted it, without any smudges or bubbles between it and my BlackBerry display, though running through the process a few times largely solved this problem.

Privacy Screen Pro attaches to your device via static cling, so no glue or additional adhesive is required, and there's no messy residue left behind after it's removed—except, perhaps, for a bit of noggin-goo build-up around the edges, but we'll get to that later in the review.

I followed Case Mate's directions to a tee: I measured my display using a ruler, cut the piece of graph paper to size and used it to trim the privacy screen, then cleaned my display thoroughly before peeling away a thin plastic layer from the screen and applying it to my device.  Still, no matter how hard I tried I couldn't install the privacy screen without at least one or two smudges between it and my display.  Eventually, I just had to get used to them.

The first few times I applied Privacy Screen Pro to my display, it was a bit off-centered because I was focusing more on installing it without getting any fingerprints or smudges on the screen than on precise placement.  After carrying my BlackBerry around in my pocket with the slightly misaligned screen, the protruding corners—the ones that weren't exactly centered—started to curl and bend back.  Those corners then began to catch on whatever they touched, most often the inside of my pocket, resulting in the screen being accidentally pulled off any time one of the corners caught. Granted, the corners bent because I didn't initially apply the screen as well as I could've, but even if you install it perfectly, those corners are still going to bend and catch eventually.

Removing Case Mate's Privacy Screen Pro couldn't be easier; you simply grab a corner and pull it off.  As mentioned above, the screen leaves no residue because no adhesive is necessary.  But you'll still likely need to thoroughly clean your display upon removal, if you left the privacy screen in place for any extended period of time, because face grease and head sweat—otherwise known as "noggin-goo"—will have built up around the edges, at least if you're anything like me.

Privacy Screen Pro is both small and lightweight, and it's unobtrusive when installed correctly—at least until its corners start to bend.  In fact, it would take a close inspection of an equipped BlackBerry to see that a privacy screen was present.

Most importantly, the product does what it's supposed to. As soon as you rotate a BlackBerry fitted with the privacy screen, visibility reduces until you hit a 45-degree-angle. The screen then appears to be blank.

After first equipping my BlackBerry with the Privacy Screen Pro, I was a bit disappointed because despite Case Mate's claims to the contrary, it does dim the brightness and clarity of your display a bit, especially since BlackBerry users themselves aren't always looking at their device from the dead center, and any movement to either side reduces visibility. But after a day or so of using the new screen, it became clear that the minor losses of display vibrancy and clarity were well worth the added privacy and protection benefits.

Different BlackBerry devices have displays with varying amounts of curvature.  For example, the Curve and 88xx screens are less contoured and flatter than the display on the Pearl.  Though I can't be sure because I never applied my Privacy Screen Pro to a Pearl, I'd be willing to bet the issue with the corners bending and catching is even worse for Pearl users because the curvature of their displays is more significant.

The Case Mate Privacy Screen Pro has one sole purpose: To make it difficult for nosy strangers to peek over your shoulder and see what's on your BlackBerry's display.  On that account, the product is very efficient. It also works very well as a screen protector, and it's inexpensive at just $14.99.  Installing Privacy Screen Pro just right may take a few practice runs, but it's well worth the time, because faulty installations will eventually lead to bent corners and a privacy screen that won't stay put.