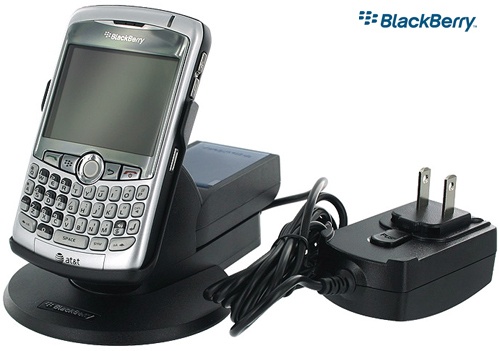 Must Have Accessory for Every BlackBerry User (& Abuser!)
The Blackberry Power Station has nothing to do with dodgy 1980s supergroups, but is a great way to recharge your BlackBerry, BlackBerry HS-655 Bluetooth headset and extra battery simultaneously with one sleek desktop unit. With a retail price of $99.99 (just $69.95 in the CrackBerry store), the BlackBerry Power Station is a simple but effective accessory from Research in Motion which not only powers up your Berry and accessories but also gives you easy access to the device’s hands-free functions. While I tried the Power Station for the BlackBerry Curve, RIM also offers the product for both the BlackBerry Pearl and BlackBerry 8800 series smartphones at the same price.

Opening the box
The BlackBerry Power Station comes in an attractively packaged box with the device charger, a cradle, a battery charger and cables. Assembling the actual charger is pretty easy. The BlackBerry cradle slides into its slot gently while the battery charger needs a little more of a shove. You are then pretty much ready to go.

The Goodies - all wrapped up

Using the charger
According to the old saying necessity is the mother of invention. The other day I had to crawl under my work desk to locate a power bar in which to insert my BlackBerry charger for my virtually dead Berry. I then had to drag up the cable and plug in the Berry and spend the next couple of hours trying to avoid pulling my Curve off my desk with the recharging cable. There has to be a better way I thought. And lo and behold the Power Station was sent my way.

As indicated, assembly really is a snap. OK so I had to submerge myself below the desk again but at least now I felt I was installing something more permanent. And something that actually added to the décor in my office. You could smell the envy. It’s only a matter of time before Vern in accounts gets one.

Charging the Curve is a Snap

A Look Inside the Spare Battery Charger

The really nice thing about this charger is not only the cool styling but also the fact that you can access both the keyboard and the side buttons. I was able to use the Curve’s speakerphone function make calls hands free. You can also use the BlackBerry in conjunction with your headset and not have to fumble around looking for your device or trying to extricate it from its sleeve or pouch when someone calls. As it is attached to a power supply you can make calls without draining your battery.

Made by Plantronics for RIM, the BlackBerry HS-655 is a cool looking headset that works really well. It's biggest downfall has always been price - RIM sells it on their  website for $139.99. Luckily, ShopCrackBerry.com just slashed the price on the HS-655 which is now a much more affordable $69.95.

If I have any complaints about the Power Station it is that the pop off button that hides the headset port is easy to lose. If it were attached that would be one improvement I would recommend.

The BlackBerry HS-655 pulled off the Power Station

Another key function is that while your BlackBerry charges, you can sync it with your computer using an extra USB cable.

According to RIM, “the BlackBerry Power Station is engineered with constant current and constant voltage technology to provide consistent, reliable power, maximize battery life and allow for safe and consistent charge times.” That’s good to know.

The Power Station comes with a 1.6 Amp power supply for rapid charging. I found the Power Station recharged my Berry quicker than the regular cable. I didn’t do an empirical experiment to test that but it certainly seemed quicker.

The headset and USB cable does not come with the device but are available in the CrackBerry.com store.

A Stylish Addition to Any BlackBerry Addict's Desk!

The Bottom Line
This innovative, sturdy and well thought out design marks the BlackBerry Power Station as one of those accessories that once you have had it around the office for a few days it becomes an indispensable tool you can no longer live without. I love that I can glance at the unit to see who is calling me and can call totally hands free with my headset and the Berry nestled in the cradle. It is also a great thing to basically have your BlackBerry charged all the time and have a central place to keep all your BlackBerry goodies in. And finally, it’s definitely the easiest way to charge a spare battery… no more having to swap batteries out of the BlackBerry to charge up the spare – that reason alone makes this a must the BlackBerry Power Station a must-have accessory for the BlackBerry user.