We were the first one in line this morning to pick-up the new device at our local Cingular store and over the next few days we're going to fill this post out as we get up close and personal with the BlackBerry 8800 Smartphone from Research in Motion. 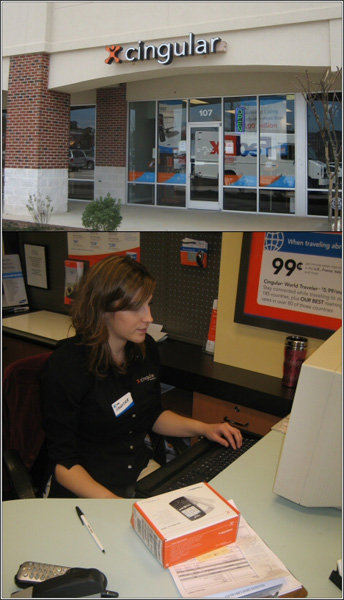 BlackBerry 8800 Pickup at the Cingular Store

Many New Built in Features to Review

Continuing with our review of the new BlackBerry 8800, we’ve done some size comparisons with two of the most common BlackBerry models, the 8700 and the Pearl.

The 8800 is nearly the same weight as the 8700, but even thinner than the Pearl. Combined with the metallic sides, this results in a device with a very solid feel. However, I find that I miss the rounded comfort of the 8700 when I hold the device in my hand.

The keys on the 8800 keyboard are bigger than on the 8700, with a 3 dimensional aspect that helps guide your thumbs to the right place while you are typing. The space between the keys has been reduced to a minimal distance, increasing the overall comfort of the keyboard.

Like the Pearl, the 8800 comes with a microSD slot for expanding the memory beyond the built-in 64M of Flash memory. This is welcome addition to the device, but I’m a little disappointed to see that the microSD slot is located beneath the back cover, making it kind of a chore to swap out cards. But unlike the Pearl, you at least don’t have to remove the battery to access the slot.

We thought it would be an interesting comparison to look at the BlackBerry 8800 compared to two of the other top smartphones featuring full keyboards. Below is a picture of the 8800 next to the Motorola Q and the Treo 700p. As far as the form factor, the 8800 compares favorably, being almost as thin and slightly shorter than the Motorola Q, and much thinner than the Treo.

One of the most popular new features of the BlackBerry 8800 is the built-in Global Positioning System (GPS). This is not a component you see integrated with many smartphones. Sure you can purchase a Bluetooth GPS receiver but it will cost you anywhere from $90 to $200. On top of the purchase price, there is the inconvenience of having a second box to carry around as well as a second unit to recharge. Lucky us, it is all in one device with the 8800. And yes, this is when the new high-capacity battery comes in handy. When you run your 8800 with GPS on, use Internet connectivity to get map data, turn off the screen timeout so you can keep on reading the route, and maybe use Bluetooth to accommodate your headset, you’ll be happy to see the battery of the device will handle the load for many hours.

Let’s go back to the GPS itself. In the advanced options, you can access the built-in GPS and display some basic information. The system will first locate some satellites and then give you your exact location. Playing with it over the last couple of days, the number of satellites varied for me from 4 to 10 and the accuracy from 8 to 48 meters. So now you are wondering, what can I do without software? Well not much. Although you might give Geocaching a try.

But that’s not really my thing. For me, the main reason to get excited about a built-in GPS is to use a navigation system. The minute I unpacked my 8800, the only thing I wanted to do is try BlackBerry Maps to find out how the GPS would perform. Enormous disappointment: BlackBerry Maps is NOT installed on the 8800 devices shipped by Cingular. No reason to panic, after all the software must be available as a download from the RIM web site. Sure it is, right here at http://www.blackberry.com/maps. But the story becomes more interesting. When trying to download the software, it won’t let you do it on an 8800, claiming the device is not supported. I will spare you the details but there is a way to get the mapping software on the device after some heavy tweaking and patching. I sincerely hope the download will be working from the RIM site soon!

BlackBerry Maps is a very simple but solid piece of software. It will track your vehicle movements, show your exact location on the map in real time and even display your speed. Each time you go through an intersection, the name of the street will be displayed on the dashboard section. You can enter a destination and get some basic directions. This is definitely not a full blown navigation system, but it is still fun and useful. We will be sure to review some commercial applications that take advantage of the new GPS system.

One very exciting addition to the BlackBerry 8800 is the MicroSD card slot. MicroSD is a small, removable flash memory card format. The cards are small, about the size of a fingernail, or about one quarter the size of a standard SD card. All devices which support SD cards can support microSD cards using an SD card adapter, which is often included in the package of a microSD card. They are relatively inexpensive and can be found in a variety of capacities.

For the security concious, the files on your MicroSD card may also be encrypted. To encrypt files on the media card that is inserted in your BlackBerry device using your device password, verify that you have set a device password.

1. Go to Device Options–>Advanced Options–>Media Card.
2. Perform one of the following actions:

To encrypt files using an encryption key that your device generates for your media card, set the Encryption Mode field to Device.

3. To encrypt media files on your media card, set the Encrypt Media Files field to Yes.
4. Press the Menu key and click Save.

To turn off media card encryption, set the Encryption Mode field to None.

Having expandable, removable memory opens up all kinds of possibilities for putting media on the BlackBerry 8800. Just like the Pearl, RIM includes a Media Manager utility to import music, photos, and videos to the device. The 8800’s media player lets you play .avi, .mov, .mp4, or .3gp video files. It also lets you play audio files, such as .aac, .amr, .m4a, .midi, .mp3, and .wav files.

The music player is functional but basic, letting you Play, Pause, Shuffle, and Repeat your songs. There is some serious room here for a 3rd party developer to come up with a good music player.

From the BlackBerry.com website, here are a few Media tips:

RIM claims the BlackBerry 8800’s battery will give you 5 hours of talk time and up to 22 days of standby time. So we put it to the test. We were able to get 7 hours of talk time on a single charge. That’s pretty good! The battery charge is also impressive, fully recharged in about 1 hour.

Featuring 1400 mAhr compared to 900 mAhr on a BlackBerry Pearl, you will appreciate the extra capacity. But you’ll still have to be careful. With Bluetooth and GPS on, you’ll end up using a lot of power in a short time. If you are worried about your battery life, consider turning off GPS and easing back on the wireless stuff. For more tips on “How to Maximize Your BlackBerry Battery Life”, check out our previous article.

This article concludes our series on the BlackBerry 8800. This is an exciting new device from RIM. The media player combined with the microSD slot for expandable memory are a welcome addition to the BlackBerry, and the built-in GPS makes real-time car navigation an exciting reality. I would have loved to see wifi and a camera on this device, but perhaps those are coming soon in other devices.

From using the Pearl, I’ve become used to the trackball for device navigation instead of the trackwheel on the side of the device. I’m glad that it appears on the 8800 as well. If you think you can’t give up your trackwheel, I’d urge you to try out the trackball. I find that ergonomically it’s actually easier to use than the trackwheel, saving my hands from some of the exertion that can lead to BlackBerry Thumb Syndrome.

Overall this is a very solid device that should keep RIM relavent even as the Smartphone market heats up with entries from the competition.

The following chart is a comparison of the 8800 with several of the most popular devices.

## This Article Was Originally Published on AllBlackBerry.com