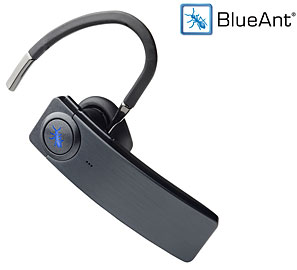 While at CES, I had the opportunity to meet the great folks over at BlueAnt and have a chat with them about their Q1 headset. This sexy little piece of hardware had me smitten from the get-go, and I fell completely in love with it during the course of testing it out for this review. It seems like many people are tossing Bluetooth headsets to the curb lately, but the little guy is sure to stick by my side for a while. I haven't used a headset quite like the Q1 before, so lets get going and see how it holds up.

Some main points about the Blueant Q1:

Right out of the box, this headset looks downright sexy. Sleek and compact, and extremely lightweight, with a removable ear hook, for those of us that prefer to rock it without. The headset also comes with additional ear buds, to ensure a proper fit. The earbuds are also ergonomically molded, providing for greater comfort when wearing for long periods of time.

Setting up the Q1 is a breeze. pre-charged out of the box, you can unwrap and have yourself up and running in minutes. Simply power the headset on, and follow the voice prompts. It's that easy. With BlueAnt's implementation of voice technology, the headset guides you through the process of pairing for the first time. Using the "Teach Me" command will walk you through a set of instructions, and goes through the various voice commands, asking you to repeat them before moving on to the next one. It even reports a "success" dialog whenever it recognizes each command, so you know how well it is understanding your speech.

I have worn the Q1 for as long as 12 hours at a stretch during the past week, with no discomfort whatsoever. The different shape of the earbuds allows for a more natural fit in the ear, allowing it to be used for a long period of time, without causing pain, as I have experienced with other bluetooth headsets. The ease with which I can use the various functions has floored me at times. My personal favorite in the long list of features is the "Check Battery" command. I have never used a headset that would actually report the remaining battery, having to rely entirely on guesswork to know when it required charging. With the BlueAnt Q1, a simple press of the button, along with the spoken command, and the headset will report the battery level of both the headset and the paired device. Getting a call? the headset will announce the number calling you, and you can simply speak "Answer" or "Ignore", a definite bonus when driving.

The Q1 also uses true Multipoint pairing, allowing it to be paired, and connected to, 2 devices at the same time. For me, this feature is all win. I use two separate devices for work and personal lines, and being able to have both connected while I am out and about makes life so simple, it hurts. Once both devices have been paired initially, simply power up the headset, and it will connect to each of the devices automatically. If I'm in a call on my personal line, and a work call comes through, a simple touch of the button places the current call on hold and switches to the call coming from the other handset. However, when calling a number from the headset voice dialing, it was unfortunate to find that I had no way to choose which device the call was placed on.

When I decide to kick back and relax with some tunes, launching the music on device automatically streams through the headset, without having to do a switchover. One sore point for me was having an issue designating a particular device to stream from when two were connected. I found that when I had paired up my work BB (2nd), the headset wanted to default to it to receive streaming audio, when all my tunes were on the personal BB. The headset also comes in handy when using a speech-based GPS navigation application, allowing you to stream the voice prompts directly through your headset for a safer driving experience.

To the geek in me, this was one utterly cool feature of the Q1. BlueAnt is constantly improving the firmware for the Q1, and makes the updates available online for updating the headset. There are even various language packs available to be loaded on the Q1, allowing non-English speaking users to get maximum usage out of the voice-control properties of the headset.

Updating the firmware was a breeze. After visiting the BlueAnt website and registering the Q1, I was able to download the updater software to my laptop. Once I installed the software, updating was as simple as launching the updater, hooking up the headset via the provided USB, and following the prompts.

All in all, I have to say that the BlueAnt Q1 is a solid all-around piece of hardware, and a perfect fit for any user. The comfort and ease of use alone make it a worthwhile addition to my BlackBerry accessory collection, and the extra features like Multipoint just put the icing on the cake. While there are a few drawbacks, as noted earlier, I would have to give this a personal rating of 4 stars overall.