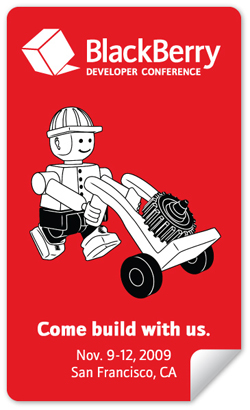 This years event is jam packed with more than 110 sessions that will appeal to commercial developers for both enterprise and consumer markets, corporate developers, business decision makers and application architects and designers. In addition to the sessions, it also gives the developer community a great chance to speak with RIM experts in how to better their applications and platforms and bring them to business and consumers alike, as well as learn more about the tools to help them get there.. With such events as the BlackBerry Developers Day happening, everyone gets a chance to be heard. Be it through panel discussion or taking part in the Soapbox hot topics, no need to be an expert just have to have some great ideas on how to make BlackBerry Smartphones better.

Check out the full press release after the jump for more information or head on over to the BlackBerry Developers Conference website for the most up to date details and happenings.

The conference will feature keynote addresses by:

Attendees will have a unique opportunity to connect with BlackBerry platform experts from RIM and will learn first-hand the winners of the 2009 BlackBerry Partners Fund(TM) Developer Challenge.

The 2009 BlackBerry Developer Conference features more than 110 sessions that will appeal to commercial developers for both enterprise and consumer markets, corporate developers, business decision makers and application architects and designers. There are a range of sessions designed to accommodate both beginner and advanced application developers, including web developers, .NET developers and Java(R) developers. In addition to General Sessions and Breakout Sessions, the conference features Hands-on Labs, onsite BlackBerry Developer Certification testing, a Mobility Pavilion and Talk With The Experts areas.

"The BlackBerry platform has continued its remarkable evolution over the past year as RIM has opened the platform more broadly and provided enhanced development tools that allow deeper integration with core BlackBerry smartphone features," said Mike Lazaridis, President and Co-CEO, Research In Motion. "Last year's conference was a big success and we are looking forward to meeting with developers in San Francisco and engaging on new ways to innovate on the BlackBerry platform."

Conference delegates will also have the opportunity to "Talk With The Experts" in order to engage in deeper discussions about developing for the BlackBerry(R) platform.

Attendees can ask questions individually or as part of a group and hear answers from RIM experts, as well as input from peers in the group. RIM experts will be available to provide feedback and advice on:


Attendees can also schedule one-on-one meetings with RIM experts for more in-depth discussions. RIM experts will be available to discuss topics in the following categories:


Conference delegates can schedule one-on-one meetings when on-site at the conference.

Quick Links:
For the latest news and information about the BlackBerry Developer Conference, and to register, visit www.blackberrydeveloperconference.com.

Visit the BlackBerry Developer Zone at www.blackberry.com/developers for the latest news, information and updates for BlackBerry developers leading up to the conference and throughout the year.

Sign up for the BlackBerry Developer Newsletter at
http://na.blackberry.com/eng/developers/resources/newsletter.jsp.