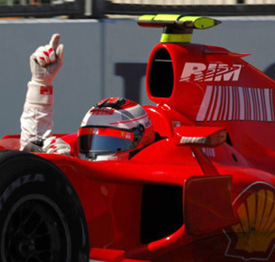 This isn't even a rumor because I just made it up. It's Friday afternoon, and I just came across the greatest commercial ever to be made (just released this week) and needed a corresponding story so I had a reason to put it on the site.

Below is the Shell/Ferrari commercial that celebrates their 60 year relationship together. They shot the commercial in some of the greatest cities in the world - Rome, Monaco, New York, Hong Kong, Rio, and Sydney and is rumored to be the MOST EXPENSIVE commerical ever created. 2 minutes of pure joy - watch it!

But seriously, RIM really should consider sponsoring Formula 1. Their brand is already established in North America and there is no other sport/sponsorship venue that embraces international brands and has a worldwide following as big as Formula 1. Afterall, it is Research in MOTION, and the fit with Formula 1 technology and speed makes sense.

As for which team they should sponsor, I would of course rather see their logo on a RED car (a.k.a. Ferrari) despite their lead product being named BLACKBerry.