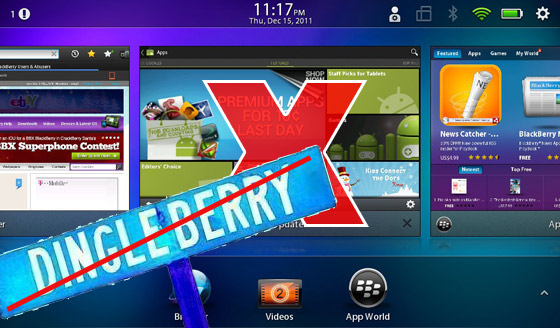 And so the cat & mouse game of tablet rooting continues. As one side moves to break security features, the other side moves to patch those flaws.  Rooted PlayBook owners want access to the hundreds of thousands of Apps available in the Android Market; Research in Motion wants them to get those apps via BlackBerry App World - and not root their PlayBook.

In an effort to stymie a certain CrackBerry blogger's attempt to create a most awesome guide to adding the Android Market to your BlackBerry PlayBook, Research In Motion has addressed two major quirks in its Tablet OS. Perhaps I'm taking this too personally, but darn it, things were working fine Thursday.

In spending the majority of yesterday (and I'm not exaggerating on this) working on my guide, I discovered an interesting thing in OS 2.0.0.6149. In a rather clever - almost devious - manner, RIM managed to cut off access to the Android Market by disabling the Accounts & Sync functions of the Android OS that runs on the PlayBook. If you managed to root your device on OS 2.0.0.4869; upgraded to 2.0.0.6149; and then tried to install the Market, a user would find him- or herself with a frozen Market application. You get one guess as to how I figured out that tidbit.

Also fixed sometime within the last 48 hours is OS 2.0.0.4869; it's not available anymore. A scant day ago, a user could sign up for the .4869 update from one web page and the .6149 update from a second. With the .4869 update, a PlayBook owner could still root the tablet using the DingleBerry rooting tool. RIM fixed that; both websites now only allow .6149 to be installed to the PlayBook. If you haven't yet rooted your PlayBook, you're out of luck... for now.

In the world of rooting, developers always hold one card close to the breast. Generally speaking, they won't release a rooting/jailbreaking tool unless they have another security hole to exploit.  DingleBerry 3.0 is in the works and is said to include Hulu support and one-click rooting. It's anybody's guess when this cat and mouse game will escalate, and only time will tell whether it's worth the effort.