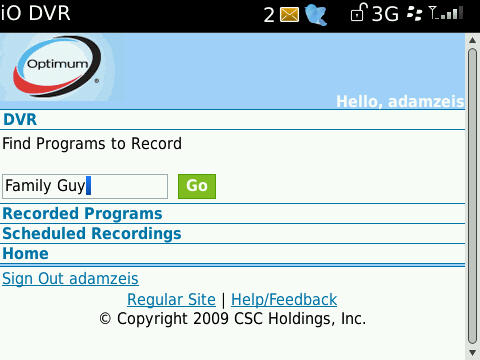 A few months back Verizon Fios released an application that allows users to control their DVR from a mobile device. The app lets you search, view TV listings, record programs and more. While it was a step in the right direction, I was still frustrated that my cable company, Cablevision, had yet to release their own. Well a few months down the road, Cablevision finally got it together and revealed a web portal that allowed users to control their DVR, and Thursday they finally unveiled a mobile site for doing the same. While not a full featured app (as we could hope for down the road) the mobile site simply lets you see what programs have been recorded, delete them or search for new shows to record. Unfortunately there are no TV listings and you have to search for each program, but its definitely a good start. The service is for Cablevisions iO TV customers (a small few of us I know) and can be reached by logging into your account on your device via optimum.net. View the full press release after the jump.

BETHPAGE, NY, November 5, 2009 - Cablevision Systems Corp. (NYSE: CVC) today announced that it has successfully introduced a mobile version of remote DVR scheduling available through the Optimum.net mobile site, its popular consumer web portal for Optimum Online customers. This new mobile application gives customers who subscribe to both DVR for iO TV and Optimum Online the ability to manage their home DVR's - including finding and recording shows and managing stored content - from any mobile device with Internet browsing capabilities over any network.

"This enhancement is a valuable extension of the remote-DVR scheduling and management feature available through Optimum.net, extending this added convenience to iPhones, Blackberry smartphones and other Web-enabled mobile devices," said John Trierweiler, Cablevision's senior vice president of product management. "Now it is possible to easily schedule recordings and manage previously-stored DVR content from anywhere, on any Web-enabled device, so being away from home doesn't mean missing that favorite show or event."

Optimum Online has achieved a broadband market share in Cablevision's service area of more than 75 percent, and is the most highly penetrated high-speed Internet service in the country, used by more than 52 percent of the homes passed by Cablevision's fiber rich network. Optimum Online offers high-speed Internet service for the home and small and medium-sized businesses, delivering speeds of up to 15 megabits-per-second (Mbps) downstream and up to 2 Mbps upstream. Optimum Online Boost offers up to 30 Mbps downstream and 5 Mbps upstream, along with advanced configurations and business-grade tools. Optimum Online Ultra delivers the nation's fastest downstream broadband connections, up to 101 Mbps, exceeding the speeds available from any other cable or telco provider at a significantly lower cost. The vast majority of new Cablevision customers choose the company's full suite of voice, video and high-speed Internet services, which deliver increased value and features through an increasingly integrated product suite.