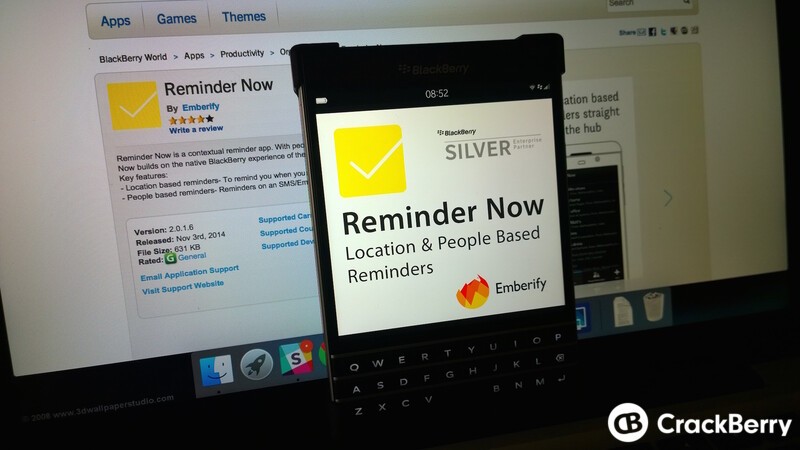 Developers Emberify have been rather busy of late. It was only at the end of September that we announced their new application, Reminder Now, and just a couple of months down the line they are introducing version 2.0 to us with some new features thrown in the mix. In addition, Emberify have also just become a BlackBerry Enterprise Partner which is great to hear.

If you missed Reminder Now the first time around it's a rather clever app that will remind you of things depending on your location. With the app being headless and having full BlackBerry Hub integration, it may be the perfect way for you to not forget to do certain things as you travel about town.

I'm not a user of the app myself, only because it wouldn't benefit me in any way, but if you've used it already yourself please sound off in the comments with your thoughts, so that others can read before parting with their cash.

Emberify released an update for the app Reminder Now. Reminder Now is a contextual Reminder app that features location and people based reminders. Version two is available on BlackBerry World as a free upgrade for current users.

"Reminder Now is evolving into a personal assistant based on user feedback, to build on the Remember and BlackBerry Personal Assistant apps," says Shashwat Pradhan, BlackBerry Elite Developer and the Founder of Emberify.

Reminder Now has been built on the use case to enhance the productivity of the BlackBerry prosumer. Emberify has also been selected as a BlackBerry Enterprise Partner and is now open to working with Enterprise apps requirements.

Availability: Reminder Now for BlackBerry 10 is available on BlackBerry World for $1.99.