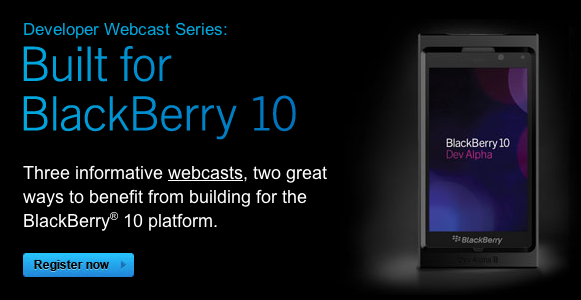 It cannot be said that RIM isn't doing enough to help developers develop for the BlackBerry platform. With the BlackBerry Jam World Tour still taking place and the recent BlackBerry Jam Enterprise Edition going on the road, RIM has been reaching out to developers around the world with many of them in possession of a Dev Alpha device to assist them in testing out their own apps.

On top of that, there have been a series of webcasts occuring in the past few months, more so in the past few weeks and those are not showing signs of stopping either. There is going to be another webcast series available for developers to attend and this series is entitled "Built for BlackBerry 10". There will be three webcasts that cover ways in which developers can gain maximum benefit when building for BlackBerry 10, as well as a webcast on explaining the 10k developer commitment.

These webcasts are always informative and offer developers a chance to ask questions at the end. Register now.