I've been a huge fan of Real Racing for a few years now - playing the original version, Real Racing 2 and Real Racing 3 on the iPad. Part 3 has now graced it with it's presence on BlackBerry 10 (praise the lord) and I'm 99% sure it will be one of the most popular games on our platform. Although games like this normally play better on larger screen devices I decided to try this one on the Q10 and I'm pleased to say that the experience is pretty much just as good.

The game is free to download (unlike the previous editions) but there is a slight catch which you'll come across as you progress through the game. Essentially, as you win races you'll be awarded with cash which you can use to buy new cars as well as upgrade the ones you own. When you start the game you'll also be equipped with some coins and these can be used to to speed up the upgrading process as you need to wait for the upgrade to complete.

If you are thinking that the game is just about racing opponents around the track you'll be pleasantly surprised to hear that there are a load of variations to the races - such as drag racing, head to head, speed trials just to name a few. 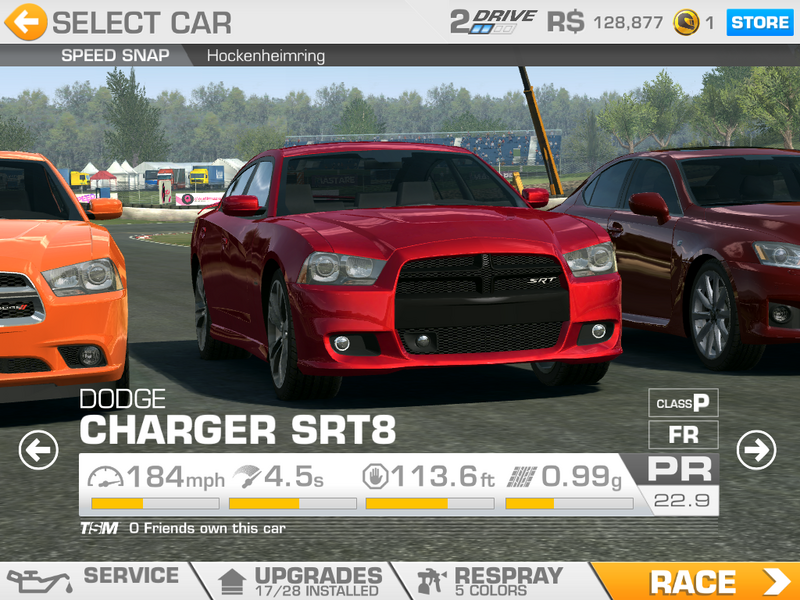 Where EA Games are going to make their money is that when your coins run out and you become addicted to the game you can buy more coins via in-app purchases. You don't have to do this though if you don't want to. I play the game on my iPad mini every evening but refuse to buy any additional coins. Unfortunately, as you get further into the game, the length of time it takes for a car part to upgrade or serviced gets longer, so instead of spending my cash on coins I just wait. Some things can only take two or three minutes, but if you play the game extensively you will soon find yourself having to wait over half an hour for an upgrade.

Although the above waiting times can be frustrating - the more you play Real Racing 3, the more cars you will have - meaning that if you are waiting for one to be serviced you can always jump into a different challenge and use another car.

In terms of controls things are nice and straight forward. The car auto accelerates and braking is just achieved by pressing on the screen. There are some further options available to you which I would advise leaving on to start with. These are brake assist, steering assist and traction control. Once you've got accustomed to the game I would advise turning off the brake assist as it gives you a bit more control in terms of late braking into corners and often giving you the edge over other cars in the race.

One of the great features with Real Racing 3 is that the other cars you are competing with are actually other peoples cars. This isn't live but the game remembers other users best lap times etc and you'll see their name and avatar when you are on the grid and also above their cars in the race. Watch out for seeing me though - I've been practicing a ton!

The graphics and sound effects don't get any better than with Real Racing 3. The only downside to the game (apart from the delayed upgrade times) is that the file is huge as we mentioned when we announced the games availability - 1.2GB! If you don't have enough space on your BlackBerry 10 smartphone I would highly recommend freeing up some. Real Racing is absolutely awesome. See you on the grid.