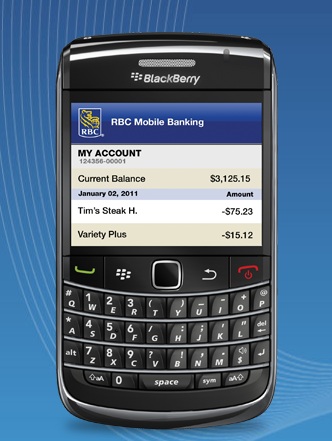 The desire to manage your money, while mobile, is becoming increasing popular. Quite some time ago, we gathered together the CrackBerry Guide to Mobile Banking on your BlackBerry; where we covered a large portion of mobile apps and mobile launchers available. One of the problems was that not many users found it useful to have a launcher versus having a bookmark to their mobile banking site of choice. Recently, RBC announced a full-bodied application for BlackBerry users. Following the iPhone launch from last Friday, they took banking convenience “to the next level”. Keep reading for more details.

The RBC application enables BlackBerry users to access a full range of services, including:

Given how important information security and privacy are, RBC is providing customers with the same safety and security guarantee as its online banking security guarantee. If an unauthorized transaction is conducted through an RBC mobile banking service, customers will be reimbursed for any resulting losses to those accounts. This will give RBC customers peace of mind when banking on the go."

According to the app, it’s available for the following models: 8520, 8530, 8900, 9000, 9630 and 9700. During a conference call I had with RBC, they did assure me that other models would work as well. For the 9800, they suggest to install the 9700 version; for the Curve 9300, use the Bold 9000 or 8520 version. I tried both suggestions and they both worked; although, since the 9700 isn't a touch screen BlackBerry, I had to use the trackpad on my Torch to make selections. They did state that OS 6 support is coming soon! I should have asked RBC for a million dollars or so to be deposited into my account for me to play with, oh well. If you want to download the RBC Mobile app, head over to the official site  from your BlackBerry browser, or text “RBC” to 722722. The RBC mobile app will be live in BlackBerry App World on January 7th.