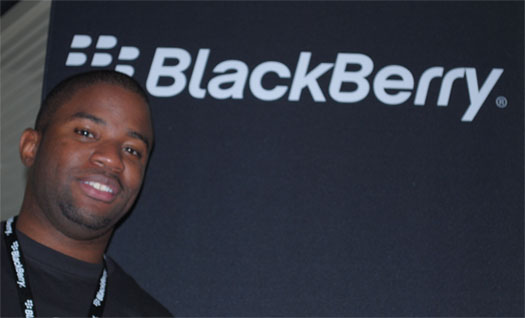 To say BBM Hackathon was an eye opening experience would be an understatement, seeing all these developers in such a small area, willing to share secrets, and help eachother out was a great thing. I was able to pull Jerome Carty from Kisai Labs away from his computer for a second time to ask him some questions around BlackBerry development, get a little more from his point of view, and see what he had to say. Let's hit the break and take a look at some of Jerome's favorite applications, his thoughts on the development community, and what he has in the works for us currently.

Tell us a little about yourself.

I'm Jerome Carty of Kisai Labs and I have been developing for the BlackBerry platform for about 2.5 years currently. When not writing code for BlackBerry I spend time dabbling around with small web applications and web development, but BlackBerry is definitely my first choice.


What are some of your applications that you have released?

I have a few applications that are publically released, and a few that are still in development phases. Some of the notable ones to date are Mancala which has been out for awhile, along with Show Me the Images, and most recently I have been working on Blaq for the BlackBerry PlayBook.

What are your favorite applications on your personal device?

BeBuzz is definitely my favorite application on my BlackBerry device for many reasons. Based only on the LED, and the colors it blinks I know if I have a sale, a support email, a BBM, or any other type of notification, and can determine the importance based on the color. Not to toot my own horn but Show me the Images has been a huge help, lots of my emails contain images and not needing to manually fetch those images is a huge time saver.

What is your favorite part of developing for BlackBerry?

The possibilities for applications continue to grow as RIM allows the developers more access to various tools and experts. With BlackBerry you are able to integrate your application into the core applications of the device giving it a seemless feel with the OS, which is something many users enjoy. I have played around with Android development, but it didn't catch my interest in the same way that BlackBerry has.

What are your thoughts on the BBM Social SDK?

It's exciting to see previous developers who may have moved on, or stoped development coming back to check out the platform and see what the SDK has to offer. The social aspect allows even further integration of our applications, and allows users to interact in a way that they never have before. The ability to tap into the 45 million BBM users with our applications is something that has us all excited.

What are some of your upcoming projects?

I have a BBM game in the works that will allow four players to interact and play at the same time, along with a number of other features. Still looking into adding some additional twists to the Connect Four type game that I have created, trying to make it a little more than it currently is.  Another application I have in concept is a photo collage application that will allow sharing of images over BBM and making a collage of the images, just need for RIM to raise the allowed file sharing per minute in order for the application to run smoothly.

What are your thoughts of the BBM Hackathon, and the overall feel from fellow developers?

It was awesome to see so many devoted, and excited developers all in the same place at the same time, helping eachother and sharing ideas. There were some newer developers, some who have never touched the BlackBerry platform prior, and some who have been around for a while, and everyone was excited. Developers were not afraid to share their secrets, and no one was shy to ask for help when they needed it, the development community definitely grew stronger from this event, and we all hope to see more of these from RIM.