"More challenging than it looks. Simple graphics but still fun and entertaining." 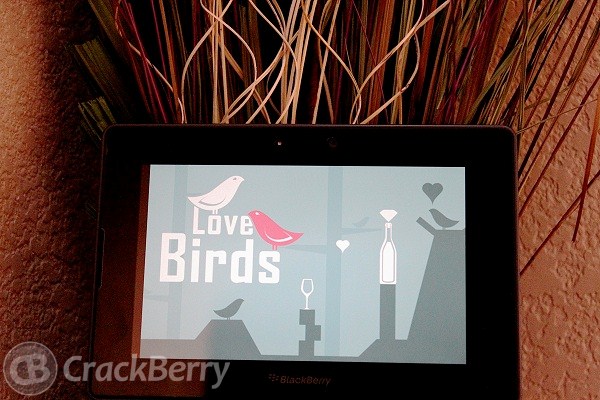 In Cocky Culture's first BlackBerry smartphone game, Devilish, we helped Dante escape the 9 levels of Hell. Love Birds is the complete opposite. This game is all about reuniting Dovey with his crush, Lovey. You can fling Dovey around the screen collecting various things to free Lovey from her cage. Whatever you do, don't keep Lovey waiting too long, and for goodness sake, DO NOT break any of her fine glasses or her favorite wine bottles! Read the full review after the break!

In Love Birds, Dovey must face obstacle after obstacle to reach the key that unlocks the cage keeping his true love captive. Collect the diamonds and hearts while trying to get the key to unlock Lovey's cage and reunite the two birds. If you by chance unlock the cage but don't get Dovey to Lovey in time, she flies away and you must repeat the level.

It took me a bit to figure out the right way to fling Dovey in midflight so he'd go where I wanted him to.

The game starts you off with 20 levels unlocked. When you earn 75 stars, the other 20 will be unlocked.

Overall it's a cute game concept (yes, we've seen it before) with a nice twist. As the developer says "not all birds are angry" and Love Birds proves it. I really enjoy playing this game and it's definitely more challenging than I first thought it would be. The simplistic visual graphics give the entire game an almost childlike appearance which adds to the gameplay rather than detract from it.

According to Cocky Culture's Blog, they'll be bringing us their already highly popular game, Pocket Ninjas (already available on iOS devices) to the BlackBerry PlayBook sometime soon. I can't wait to see what other goodies Cocky Culture will give us next!

Compared to a similar game that we won't mention, the concept of this game isn't new but it is fun. The PlayBook allows the player to really utilize the relaunch feature and besides, who doesn't love cute little birds? Download Love Birds for the BlackBerry PlayBook