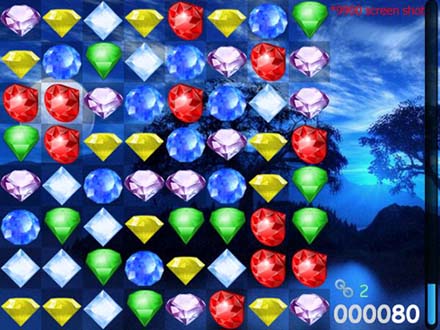 For some, games are a necessity on their BlackBerry smartphones. They’re great time killers and they make you look extremely busy (unless someone is looking over your shoulder). Toysoft Development Inc recently brought their version of one of my favourite types of games to the mobile platform; Jewel Breaker. More than likely, you’ve probably seen a game like this before; a screen full of different coloured gems and you have to side-swap them in order to make a vertical or horizontal line of 3 or more. They disappear and more fall from above to fill in the gaps. I personally enjoy this type of game, as its mindless fun, and allows me to grab as many gems as I want without having to run away from a Jewellery store security guard.

Jewel Breaker has three game modes to choose from; Standard, Timed and Infinite. You cannot switch between games modes once one has been selected – you have to exit the game and start again. The colours and graphics used for the game are quite vivid, although there were a couple of small glitches found. At times, a gem would be replaced by a black square or the white border used to indicate a selected gem, which would appear on several gems simultaneously. On my Bold 9900, I would only see these when playing the game using the trackpad; touch screen play was flawless. Speaking of BlackBerry models, the game can be played on the BlackBerry Curve 9350/9360/9370, Bold 9700/9780/9900/9930, Torch 9800/9810/9850/9860, Tour and Storm 1 and 2. I should also warn youjojij that the sound effects are loud by default, so you had better use that volume rocker to turn that down so to not disturb your classmates or colleagues. If you’d like to pick up Jewel Breaker, you can buy it for $0.99 from BlackBerry App World.