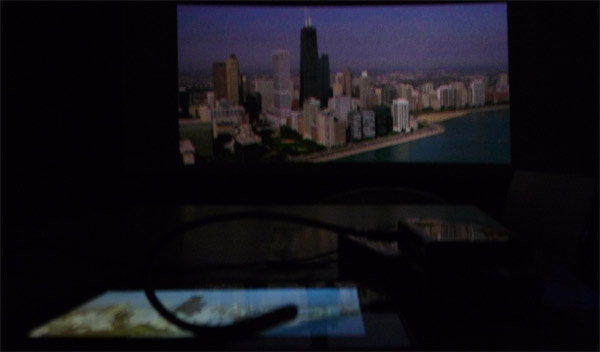 In a darkened room at the South Hall of CES 2012, an image springs to life. Gracefully, a sea turtle swims across the wall. A cityscape slowly pans by. A volcano erupts. I'm watching the BlackBerry PlayBook's HD Demo video, but I'm not watching it on the PlayBook itself. Attached to the BlackBerry tablet is a pocket-sized pico projector, the WOWee ONE VUE.

Don't let that "pocket-sized" designation fool you. Using a green light laser, the projector is able to create images up to 8 feet across at a resolution of 480p in full color. The device features an infinite focus ability that means no matter how close or far away the projector is from the screen/wall/ceiling, the video always stays in focus. While the VUE doesn't project video in 1080p, the bright, clear image; two hour battery life; and very small size are well worth the tradeoff. Weighing a mere 4.1 oz (117g), the projector is highly portable.

Right out of the box, the device is fully compatible with the BlackBerry PlayBook's microHDMI out port. All the connections you'll need are already included in the packaging; there's no need to go out and buy extra cables. The tiny projector also comes with a 30-pin connector for the iPad and supports MHL-HDMIconnected devices.

The WOWee ONE VUE is a great traveling companion for anyone making presentations with a PlayBook. Previously, you've seen just how well the PlayBook can make any presentation. With the WOWee ONE VUE, those presentations can happen just about anywhere. And when you're done, all your presentation tools fit in a pocket, ready for your next adventure. The WOWee ONE VUE isn't available quite yet, only listed as "coming soon." You can rest assured though, this projector will most probably fly off the shelves at a projected price of around $360.