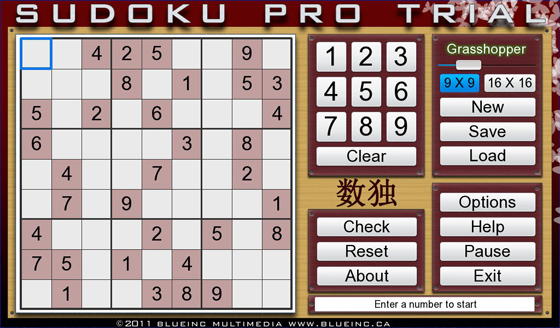 Are you a fan of Sudoku? Or maybe you always wanted to try it, but never got around to it? Blueinc multimedia has developed an awesome Sudoko app specifically for the BlackBerry PlayBook called Sudoku Pro. This version of the popular number puzzle game features 9 X 9 and 16 X 16 grids, 4 levels of difficulty, auto-hinting and more! Displayed on a beautiful background with pleasing colors, it is sure to give both the novice and the seasoned puzzler hours of fun.

I tried out the free version, which gives you 10 days to play to your heart's content. Some of the options are disabled, such as loading a saved game and different difficulty levels, but that is to be expected in a trial and is nothing that hinders gameplay at all. Sudoku Pro is laid out really nicely, with the game board on the left of the screen and all the options on the right. Playing is simple, and requires little explanation, though a help screen is available if needed. There is a little status bar at the bottom that tells you how many squares you have left to fill and how long you've been playing the current game, which is nice. The developers are planning many updates in the near future including custom backgrounds, score sharing, new puzzles, and portrait mode.