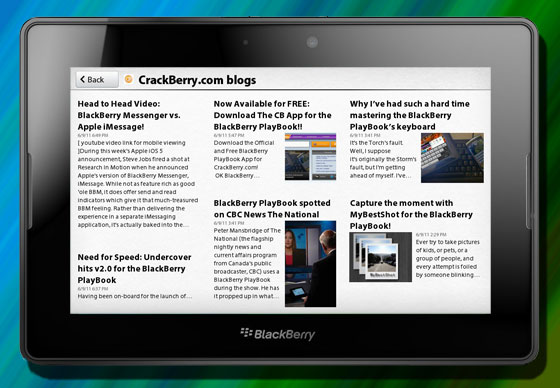 I love it! That's it; BlackBerry News is awesome. End of story; enjoy the rest of your day.

I suppose I should go into a little more detail. Just yesterday, Research In Motion released BlackBerry News for the PlayBook. If you don't know, BlackBerry News is a Really Simply Syndication (RSS) feed reader. Most RSS readers, like BlackBerry News Feeds for the BlackBerry smartphone, give you lists; lots of lists. Usually your feeds are in a list; opening a feed (like the one for CrackBerry.com) brings up a list of the most recent articles.

BlackBerry News is like no RSS reader I know. Forget lists, how about reading your articles like in a newspaper? I know that header image up there spoils a bit of the surprise, but BlackBerry News lays out articles from your feed in a format that's very easy on the eyes. Along with the headline and sometimes an image (depending on the article), you'll get a sampling of the news item; letting you quickly decide if that news is worth your time

With any brand-new product, there are bound to be some tiny glitches. Frequently when touching the read more links in articles, the web browser crashes before loading the full article. Better way: swipe down from the top to open the options menu and touch the Browser button. Secondly, syncing with BlackBerry News Feeds seems to only happen the first time the app loads. I was hoping the two apps would sync back and forth as I added feeds to both, but no luck as of yet.

I am impressed at the amount of effort and forethought that went in to making this app. It is visually appealing, plays videos right inside the app, and - most importantly - is highly usable. BlackBerry News is without a doubt the best RSS reader for the BlackBerry PlayBook.