Upon first glance at the title of this post you may think to yourself that this is the same QuickLaunch that was on BBOS. A staple application for most of my legacy devices, it offered the ability to access your most used apps with the simple press of your right side convenience key. Of course with the introduction of BlackBerry 10, the convenience key was no longer necessary. However, that didn't stop one developer deciding that this functionality was still important for BlackBerry users, and as it happens the name.

Quick Launch works just as its predecessor had. It creates shortcuts to your applications both downloaded and the core ones. Though there is one caveat to this. Due to API limitations Quick Launch does not recognize all applications installed on your device. I found that out the hard way when I asked the developer why certain applications I use on a daily basis (i.e. Blaq, iGrann, and Amazon Appstore) did not appear in the dropdown list. Even with this limitation, Quick Launch is still designed for power users to access URLs, settings, and applications quickly and easily.

When launching Quick Launch for the first time you are presented with your page. Users can create more than one page and are given four rows with eight slots to fill by default. By going into settings, the maximum number of rows can be adjusted from 1 to 9 (18 slots). To modify a page, simply tap on an open slot to edit the launcher. This allows the page, or card, to be adjusted depending on the screen size of the device you are using. For instance, a Z30 would have room for more rows, whereas a Q10 could utilize the default. 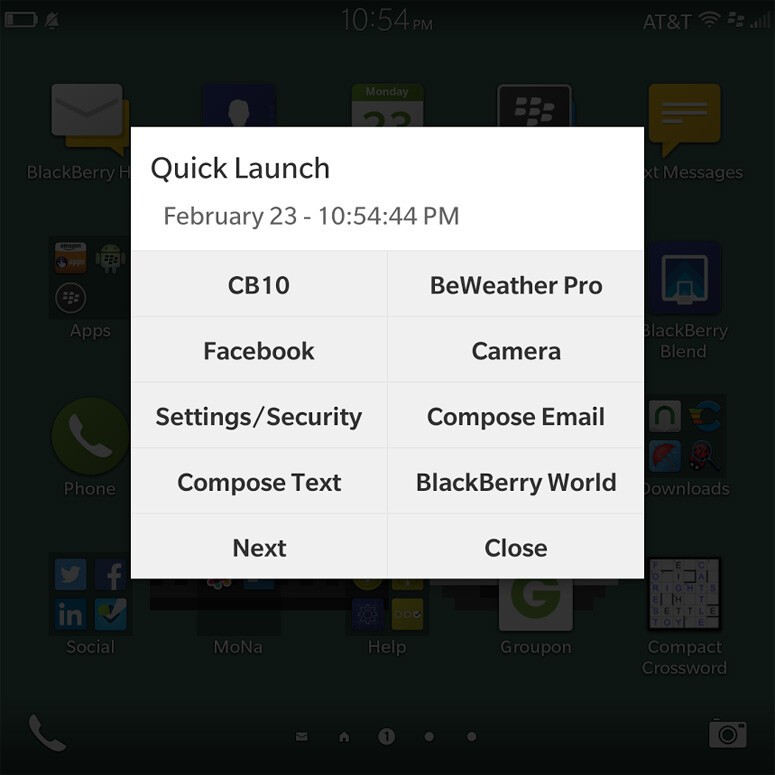 From here, the interface is designed, albeit a little crowded, to let you select which apps and functions to include in the Quick Launch pages. The dropdowns are sorted by category, such as core applications under Default, third-party under Application, and, of course, Settings (which is self-explanatory). At the bottom you can insert URLs, files or enter in a contact name to create a speed dial. To make sure it works properly there is a test button before saving the page.

Rather than use a side convenience key, Quick Launch substitutes the volume keys. When a user presses and holds the up or down key, selected in settings, it will automatically bring up the dialog box. Each shortcut is neatly laid out with users having the choice of tapping on the application, scrolling through each card, or exiting the box.

From launching contacts, applications, or even composing an email or text all you have to do is press and hold one button rather than swipe out of one and into another. As my old employer used to say, anything that saves a "click" or extra steps is always a good thing and in that area Quick Launch does that.

As someone who is on my BlackBerry every minute of the day this application is convenient for switching applications with a button rather than gestures. Does it bring a similar experience that we had BBOS? In a way it does but, unlike that one, this version cannot include every application, which hinders its purpose. What is holding this application back is the lack of compatibility with third-party applications. If developers can make their applications compatible then I do see this application as being useful. Until then, it is a decent application launcher for those apps, files, and settings in BlackBerry 10 that are. You can purchase it for $1.99 for all devices running OS 10.3 and higher.