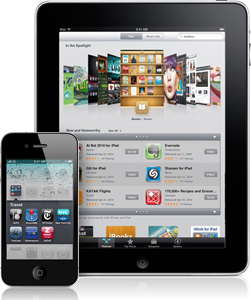 Question of the Week: What apps are out there that
you'd like to see come to BlackBerry?

I've been wanting to ask this question to the CrackBerry community for a while now, but somehow it kept slipping my mind to get the post done. Today I remembered so here it is. I want to know what apps you'd like to see come to BlackBerry. I know a lot of BlackBerry users also own a second mobile device, like an iPod or iPad or even an iPhone, and a lot of the CrackBerry enthusiasts out there are familiar with the selection available in Apple's App Store or the Android Marketplace. BlackBerry has a decent apps base and we've seen some growth in the number of BlackBerry apps available (download the CrackBerry App Superstore here) but obviously BlackBerry still has some catch up to do in the app and games space.

So which apps would you like to see come to BlackBerry? We'll go through the list when it's all done and toss up a follow up post. Maybe we can get the word out and we'll see some make their way to BlackBerry sooner than later. I know I'd love to see a KijiJi app for BlackBerry and get some Angry Birds going on my Torch. Make your list in the comments!!