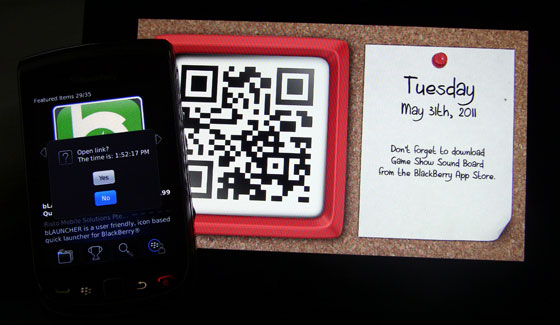 To put it in the developer's own words, "[QR Clock] really has no purpose unless you've got a sense of humor." The application simply displays the current date on the right and an ever-changing QR code that displays the time in seconds. It really only serves to be a difficult to use clock - whipping out your BlackBerry, opening App World, and scanning a bar code is a bit far to go just to find the time - for geeky people who like weird clocks (e.g., me).

So why are we even blogging about this app? Take a look at this iPad app in the iTunes App Store. Now, take a look at this application in the Android Market. Finally, one more in BlackBerry App World. Notice a theme? Those aren't just similar applications. They're the same app. Quite possibly, QR Clock is the first application built from a single project to be deployed to all three of these app stores.

QR Clock was built as a free app to promote Dream Injector's Game Show Soundboard, which Adam reviewed on the blog and demoed in our last podcast. It was also built as a "Hello World" app. If you're not familiar, "Hello World" is traditionally the first program a novice coder writes. They can also be used to prove a concept.

According to Adobe, Flash CS5.5 allows users to "[d]evelop content once and deploy to virtually any device or operating system..." QR Clock was written to test just that. With a single project file, the developers were able to submit and gain approval for the same program into three different environments. "Apple was obviously the biggest surprise for me here - they approved and posted the app in their store within a week," says Dream Injector Developer David Pascual.

Application development can be an expensive and time-consuming operation. To make things worth their while, developers have to go to where the money is. Right now, the money is firmly in Apple's hand. With designer and developer's tools like Adobe's Creative Suite 5.5, creators don't have to make a choice. Write it once, deploy it almost anywhere. App development just got a bit more cost-effective.