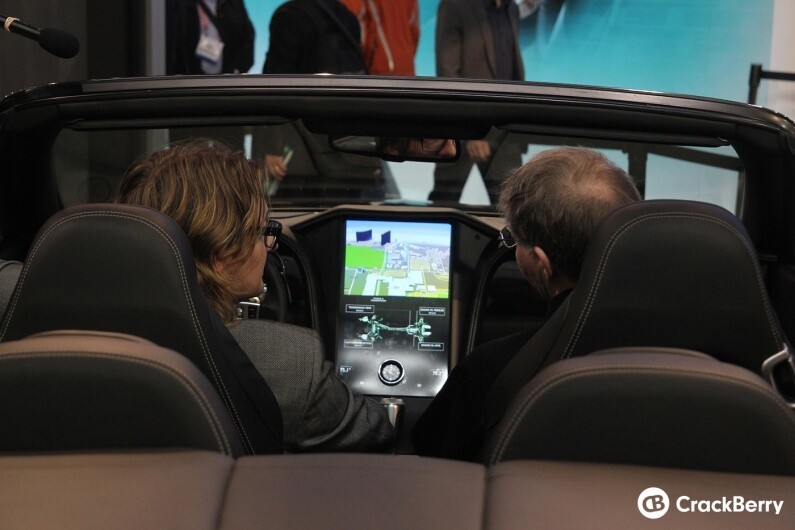 I'm far from an expert when it comes to how clever a car can be but today sees some sweet news for BlackBerry as QNX is officially adopted by VisLab at the university of Parma.

Non BlackBerry fanatics will more than likely have no clue that the software powering many high end cars is actually owned by BlackBerry and in terms of the Canadian company getting back on track financially, QNX will certainly be a great asset to them.

Technology is always improving and with QNX and VisLab working together we could well see QNX doing a lot more work in the car than we've seen before - even driving itself!

VisLab has been in business since 1990 so are not newcomers to working in the automotive industry. They are also regarded as one of the leading centers for artificial vision applied to vehicles.

Good news all round I say.

OTTAWA, ONTARIO--(Marketwired - April 8, 2014) - QNX Software Systems Limited, a global leader in software platforms for in-car electronics, today announced that the QNX(R) Neutrino(R) operating system is powering mission-critical systems in a new autonomous vehicle project developed by the Artificial Vision and Intelligent Systems Laboratory (VisLab) of the University of Parma. These include the systems that perform path and trajectory planning, that provide realtime fusion of laser data and visual data, and that implement the human machine interface (HMI). The new vehicle, named DEEVA, will be unveiled at an event later this summer to showcase advancements in autonomous vehicles.

QNX OS technology has been powering autonomous systems - from robot vacuums to submarines to DARPA Grand Challenge vehicles - since the 1990s. VisLab chose the QNX OS because of its reliability, realtime performance, and long history in safety-critical systems.

For more than 20 years, VisLab has been a leader in applied research in artificial vision and intelligent systems, paying particular attention to road environmental perception by means of onboard sensors. VisLab has carried out a variety of successful experiments and projects over the last few years, including an autonomous vehicle launched last year that negotiated busy, downtown, rush-hour traffic and complex situations like traffic circles, traffic lights, and pedestrian crossings. DEEVA features a unique and extremely rich set of sensors that deliver a complete 3D view of the circumference of the vehicle. To achieve this level of environmental perception, DEEVA processes an immense quantity of data and interprets it in real time with high reliability.

"Autonomous cars are the future of the automotive industry and our current project is pushing the envelope to demonstrate the capabilities of this growing trend," said Professor Alberto Broggi, president and CEO, VisLab. "In the design of our vehicle, we selected building blocks offering high reliability with proven safety records; the operating system powering the vital elements of the vehicle is one of those and is why we chose the QNX OS."

QNX Software Systems has a 30-year history in safety-critical systems, from nuclear power plants to the Space Shuttle, as well as proven competency in certifications to safety-related standards like IEC 61508 and IEC 62304. The QNX OS is deployed worldwide in the automotive, industrial, medical, networking, and consumer appliance markets, and is based on a modular microkernel architecture designed to enable high levels of reliability, availability, scalability, and performance.

"We have a long history in autonomous systems and we are honored to contribute our expertise to VisLab's autonomous vehicle project," said Derek Kuhn, vice president of sales and marketing, QNX Software Systems. "We pride ourselves on offering an operating system platform that meets the stringent requirements of mission-critical systems, like autonomous vehicles.