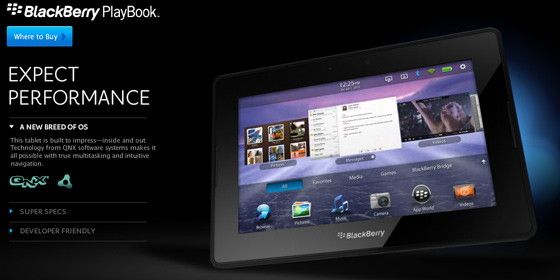 I honestly don't know if this is a recent change to the BlackBerry.com website or if it has been this way for a while on the PlayBook page (my attention was brought to it this morning by this CrackBerry forum thread). But as far I can recall this is the only time I've ever seen the official QNX logo used in official marketing materials of the BlackBerry PlayBook.

But given the state of BlackBerry bashing in the media today, and given that the biggest gripe for BlackBerry Smartphones is the need for an overhauled OS (and more apps!), I can't help but wonder if we'll see a bit more of this QNX co-branding emerge as QNX-based BlackBerry SuperPhones hit the market. While the QNX brand may not be super well known by consumers, it does have a very good reputation in the industry (and starting with the letter Q it sounds like it must be techy and powerful and awesome). RIM making it more well known that the OS is based on technology from QNX Systems will make it very clear that this is a NEW BlackBerry operating system, which is a message they'll really want to get out there with the new generation of phones.  These won't be evolutionary BlackBerry Smartphones, which is what we've seen to date.

Question of the Week: If you were on Research In Motion's marketing team, would you highlight the QNX brand within marketing materials for BlackBerry devices that feature the QNX operating system, or would you keep that away from consumers and just push it as a new and improved BlackBerry OS solely with the BlackBerry brand involved? Any marketing gurus in the house? Sound off with your thoughts!