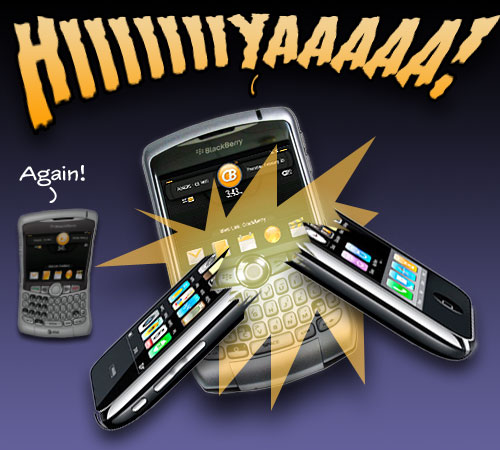 Pretty solid results for RIM considering they cover 50% of the top ten. They had this to say on it:

With the BlackBerry brand occupying 5 of the top 10 smartphone models, it is clear that RIM continues to have the broadest and most popular range of smartphones for different customers in the United States. RIM has shipped over 75 million smartphones to date, including a record 10 million smartphones during its latest quarter alone.

There's a couple interesting points here to think on.... 1) why do all the BlackBerry Curves get grouped together while the iPhone 3G and 3GS get separated out? I wonder if the iPhones were grouped if they'd beat out the Curves? 2) which Curves are selling? If it's mainly the 83xx series (that you can get for essentially free these days) that's flying out the door, is that sort of a bad thing for RIM longer-term as the device they're selling the most of is the one that's essentially most out of date and delivering the least-stellar BlackBerry experience of what's currently available? RIM is all about apps these days, and the Curve 83xx do the least-good job of running apps. Following this notion, it's a little surprising that the Pearl is outselling the Bold, Storm and Tour (though it is available from more carriers in the US than any of the other non-Curve devices).  3) I wonder what 2010 is going to look like? The Curve dominated 2009...  any bets on what we'll see this year?!

Congrats again to RIM for kicking some BlackBerry butt in the US market! And a BIG welcome to any BlackBerry owners out there stumbling onto CrackBerry.com for the first time who fall into these Q4 stats. You've found the online destination for all things BlackBerry. Spread the word!