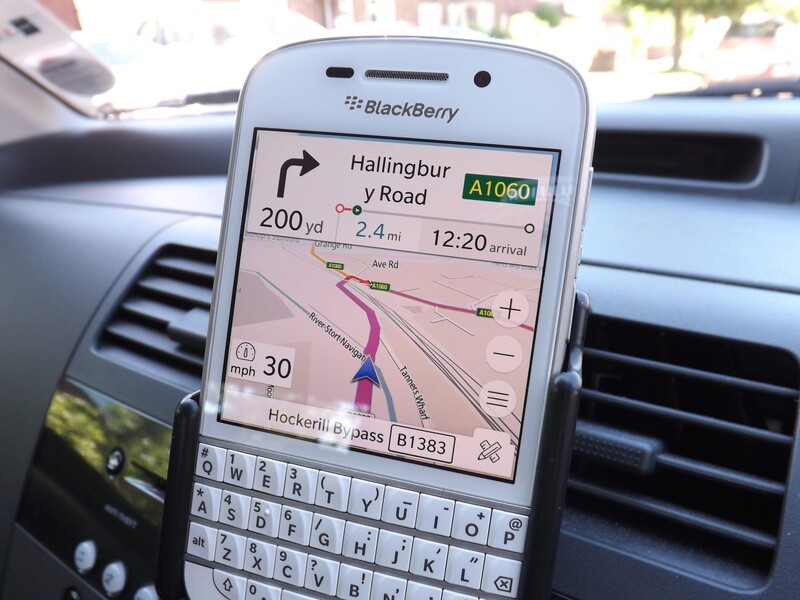 Although Navfree has been around on BlackBerry 10 for some time it wasn't until recently that the satellite navigation app was updated to support the BlackBerry Q10 and Q5. As predominantly a Q10 user that was my key to give Navfree a good test.

I'll be honest and say that I'm a big fan of BlackBerry Maps and I use it numerous times a week for getting to locations I'm not familiar with as I volunteer as a Community First Responder with the East of England Ambulance Service. I'm not saying BlackBerry Maps is better that the competition as I know it's not, but for me and the fact that I can just pull out my BlackBerry - key in the postcode - select Maps and off I go is the quickest option I've found after using an iPhone, Android and Windows Phone device.

So can Navfree compete with BlackBerry Maps? Let's take a closer look.

Like the name suggests, the app is free to download. Once you do so you'll be asked which region you are in so you can download that map to your BlackBerry. As the map is stored on your device this ensures that Navfree will be reliable, as it doesn't require a data connection when you are using it - always a bonus if you are travelling in the middle of nowhere.

Once Navfree is open you'll find yourself with the map on-screen. At the very top of the display is a search box and it's here you can start typing, but as you do so a new screen will open giving you options for more than just an address. The options here are Foursquare, Google, POI, Favourites, Recents and Contacts. Once you select a location to navigate to you will return back to the map in 2D with the address you have chosen being displayed in the center of the screen and its distance from you beside it. At the very base of the screen you will see the name of the location you are travelling to and also a car icon. Tap this and the route will be calculated and you're ready to set off.

The map will default to 3D view as you would expect and with auto day and night modes it's rather nice on the eye. If you are using an all-touch BlackBerry you will obviously have more screen real estate, but even on the Q series devices Navfree looks pretty darn sweet.

As well as reliability I have to admit that one of the things that has pushed me to like certain sat nav apps over the years has been the UI along with certain information that is shown on the map. This is one area where Navfree does a beautiful job and there are parts that I much prefer compared to BlackBerry Maps.

At the top of the map display you'll be shown how far until your next turn, its road name, time / distance to address. Within the settings you can alter what information is shown here which is a nice touch.

The majority of the display will be taken up with the map. On the bottom left you will have a speedometer, which is a feature I love to have, although not present with BlackBerry Maps. There is also the ability to have a speed warning alert that will pop up above your speed. Once again, within the settings you can choose to have the speed limit either always displayed or just when you exceed the limit.

On the right side of the map you will have zoom in & out toggles as well as an icon to send you into the menu. Here there are a ton of things that can be accessed and tweaked and the options available massively outweigh those in our native app. Rather than me list them all you can take a quick look at them all on video:

Map Reports are a nice option which is built into Navfree, although I personally don't ever use it. Let's say for example that you come across some road works on your travels and want to share with other users. By using the Map Reports icon at the bottom right of the screen you can jump in and select from various categories to report the delay - a very nice touch. The options here include: Traffic, Police, Accident, Safety Camera, Hazard, Road Works, Weather, Map Error and Closure.

Up until this point all has been well with Navfree, but I have found one area where there seems to be issues and this is if you deviate from the route. When doing so I found that the app took quite a while to calculate a new route or on some occasions it didn't do so at all, which was quite frustrating. Apart from that though, everything else seems to be pretty much spot on.

I've become quite fond of Navfree due to it having more options than BlackBerry Maps. Will I be using it as my mapping app of choice? I'm afraid the answer is no - at the moment. The main reason is that I just love the way that BlackBerry Maps is integrated into the search options in BlackBerry 10. I can just whip out my BlackBerry, type in where I want to go, select 'Maps' and I'm off. This is just my decision though and I'd highly recommend you trying Navfree, as you may well prefer it. I wonder if BlackBerry has any plans in the future to make the native mapping app a bit more in-depth?