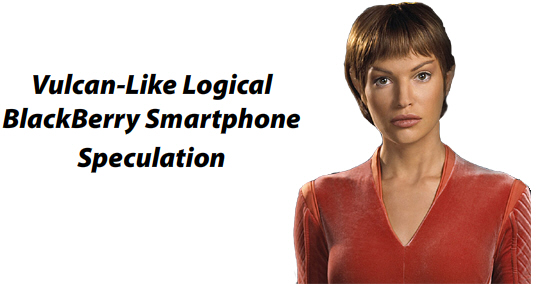 This isn't news. This isn't a rumor. This is just my Friday evening attempt at pure BlackBerry smartphone speculation (you could think of it as a loose prediction) based on logic and RIM's past precedent. We've already had a glimpse of some of these devices already, but in this article we're gonna skip all the codenames and rumored device model numbers, which to be honest have me slightly confused at the moment, and instead focus on the end game - what's hitting the market for 2009 (and maybe even beyond). My Vulcan-like logic awaits you after the jump!

Things have been moving fast in the world of BlackBerry. CrackBerry.com launched in February 2007 (not that long ago!), and at the time I was using a cutting edge BlackBerry 8700! Then we saw the rollout of 8800 and the launch of the Curve that May at WES 2007, and a few months later the Pearl "2" rolled out (and various iterations of these base models from there). For a little while (I can't remember off hand now if it was a few weeks or a couple of months), things in the BlackBerry World seemed almost "calm." To put it another way - I didn't have to create any new room for new device models within the CrackBerry Forums. Things were good to go with a new and improved generation of BlackBerry Smartphones in the hands of BlackBerry users worldwide.

Roll back a few months and within in a very short time period a wave of rumors flooded out that brought word of RIM's next generation of smartphones - the Bold (9000 Meteor), the Pearl Flip (KickStart), the Curve 8900 (Javelin) and the Storm (Storm / Thunder) and things have been kinda crazy ever since. From speculating on specs, to leaked documents, to prerelease hands-on reviews and onto release date speculation and full release reviews, there's literally been something new to report on every day. As these devices hit or near the market, instead of getting some down time, we're already seeing rumors for the next generation of smartphones surface. It's almost crazy - AT&T doesn't have the Bold yet, and not one Storm has been sold, yet we're already talking about what's next before the first what's next is even in our hands.

Looking at the next generation of devices coming down the pipe, we're already hearing the codenames and starting to get some of the base specs associated with them. Today we learned a bit about the Pluto and the Magnum. The bad thing about codenames for devices is that they give us a perception of something "totally new," since the name itself is totally different from any other name. But as we saw with the KickStart and now with the Javelin, a cool codename doesn't mean a new brand name when it's time for the device to go market. And seeing how the KickStart became the Pearl 8220 and the Javelin has become the Curve 8900, I think RIM has already tipped us their cards for what we'll see in 2009. It takes a lot of effort and money to build a new brand, and once a brand has steam in the market place it doesn't make a whole lot of sense to let a brand die out. Therefore, I think it's pretty logical to assume the majority of the devices we seen in 2009, while they'll all get cool codenames for the next few months in all the blogs, will likely hit the market under the same brand name. Some predictions of what I think we'll see, based on where we're coming from:

Bold "Touch" - the Bold already has 3G/WiFi/GPS in one. As we saw today, you can expect it to have a touchscreen added in on, and maybe even a more streamlined form factor. And I'm sure other hardware will get a boost as well - more RAM, 3.2MP camera, etc. But based on what we've seen of the Pluto so far, I'm guessing it will go to market as the Bold "something".

Curve "Touch" or  Curve "3G" or Curve "3G+Touch" - The 8800/Bold and Curve are two very distinct form factors, and I think we can expect that distinction to continue in to 2009 and beyond (bigger vs. smaller, keys spaced  vs. not spaced). The big gripe people have for the Curve 8900 right now is that it lacks 3G. I think in 2009 we can expect to see a Curve with 3G. But now that RIM is embracing touchscreens, I wouldn't be shocked if we saw this device come through with both 3G and a touchscreen. Or maybe it'll be an either or if they can't get the battery life out of the equation. We're sort of used to compromising with the Curve -- do you want an 8310 with GPS or 8320 with WiFi? - so maybe the new choice will be Curve with 3G or Curve with touchscreen (let's hope they keep the WiFi/GPS in both option standard on all models).

Storm "HD" - Everybody is excited for the Storm right now and for good reason...it look's pretty frak'n awesome. But the more we hear about it, the more it seems Vodafone/Verizon wanted to see this device hit the market, and hit the market as soon as possible. To meet the timelines, it couldn't be "the perfect device" on day one. Obviously they need to space out releases, but I'm sure an upgraded Storm will come along sooner than you think. Apple went from the Iphone 2G to 3G pretty much in the space of year - I wouldn't be surprised if the second Storm came around maybe even sooner than that. Of course it would have to be differentiated from the first one. Seeing how Windows Mobile has the HTC Touch HD and that there's speculation of an iPhone HD in 2009, I think a Storm "HD" only makes logical sense. And hopefully it will pack WiFi and a bit more processor punch to run it all (hell, let's toss in Bose or Harmon Kardon speakers to really make it a multidmedia dream). I wouldn't expect a change from the Storm branding when this goes to market, just a tag like "HD" tacked onto the end. Again, keeping the brand alive extends the lifespan for selling all the higher-margin, already on the market for a while devices (which will now be available at lower price point and still sell like crazy even though the coolest device is now available).

"New Brand" 3G Touchscreen - If Vodafone/Verizon have locked up the rights to the Storm exclusively (with the exception of letting Bell and Telus get in on it too), then RIM needs to put out a full-touchscreen device so AT&T and Rogers and other carriers can have a full-screen touchscreen BlackBerry (and it of course needs to support their 3G networks). To get around the Storm agreement, I'm guessing a new brand will be formed for this bad boy and that the device will somehow be visually different from the Storm. Specs-wise I'd expect it to trump the Storm "1" (will have WiFi), and features-wise I bet it will be close to the Storm "HD" or even be more desirable (maybe they'll do something funky like a 5MP camera or a 1GB of ram). Or I could see some jockeying for position here that continues for the long-haul between the two competing fullscreen touchscreen devices... When released this "new brand" device will trump the Storm on specs, then the Storm "2" will be releaesed and be better than "new brand 1" device, and then finally this "new brand" device will get an update and be the best of the best. Either way, I'm likely going to want this device BAD.

New Candy Bar Pearl - Seeing the 8800 series turn into the Bold and seeing the 8300s get an update to the Curve 8900, I'm hoping we see a revision to the Pearl candy bar in 2009 as well. The Pearl Flip is of course brand new, but specs-wise doesn't touch the Bold or Curve 8900. I'm not sure that a new Pearl candy bar would touch them either (there is only so much space to work with), but it would be awesome to see the Pearl candy bar get an upgrade that included a nice piece of glass a la the Bold or Curve 8900, the new and improved trackball, the next-generation Bold/Curve 8900 stylings, more RAM and OS 4.6. If they can keep the battery life up, a faster-processor would be welcome too!

So while were going to start seeing a lot of rumored codenames and specs and release dates in the weeks and months ahead (that's why the Internet exists, doesn't it?!), I think the speculation/loose predictions above are pretty reasonable and can help keep things in perspective as details begin to emerge. Hopefully RIM will throw us  a curve ball too and maybe toss in some surprises (the Pearl Flip was a bit out of left field!) that I never mentioned here... I'm a big fan of surprises!

So if codenames confuse you and model numbers start to make your head hurt (as they did this morning to me)... remember, it is likely the majority of devices will eventually go to market as an existing brand name + tag line. RIM just did it twice with the Pearl Flip and Curve 8900 and I think that trend will continue, with maybe one (max two) new device brands launched.

So what do you think? Logical? Vulcan logicial? Or am I completely out to Lunch? Drop your thoughts in the comments!

** FYI - I'm not really a Trekkie (have nothing against those who are though... I'm just too busy on my CrackBerry), but will admit to having watched more than a few episodes of Star Trek Enterprise just to see T Pol. Hottest Vulcan EVER. **