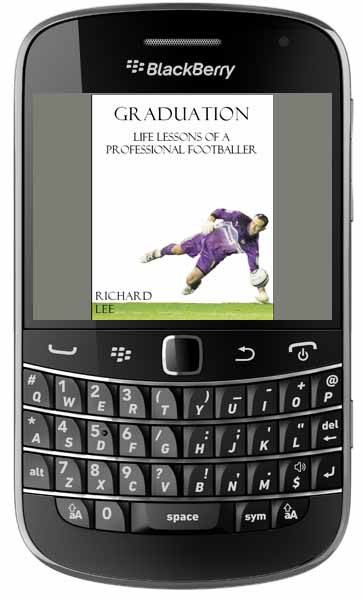 We all have our own reasons for sticking with BlackBerry, and one that we hear time and again is the indispensable keyboard. A lot of converts to other platforms brush it aside, saying keyboards are overrated and out-of-style, but then a story like this pops up and reconfirms just how much we rely on those smooth QWERTY keys.

Richard Lee is a professional English footballer currently playing for Brentford as goalkeeper. There came a point in his career where he considered quitting altogether, but instead he chose to fight for his place on the team and ended up writing a book about the challenges he faced. What's unique about Richard's book, is that all 50,000 words were written on his BlackBerry Bold. In a recent interview, Richard revealed that he actually started out writing a blog for his website, but before long was 10,000 words in and had a lot more to say. You can read an excerpt from the interview after the break, where Richard goes into further detail about why he wrote the book on his BlackBerry, and why he chose that over a different type of phone. (Spoiler: It's the keyboard!)

This isn't the first time a book has been written on a BlackBerry. CrackBerry member Jessica Meigs wrote a novel on her BlackBerry as well, and even paid tribute to Kevin in the story, naming a virus after him. You can find out more about Jessica and her zombie horror series The Becoming on her blog, becomingzombies.com.

Mobilesplease: What prompted you to write the book?
Richard Lee: In some ways it happened by accident. It began as being a blog for my website and before I knew it I’d written 10,000 words and was only 15 games into the season. It was at this point that I realised I was onto something quite unique. I’d certainly never had a season like it and to use a cliché it certainly was a ‘roller coaster’ of a season. As luck would have it I mentioned the idea to a friend who had recently had a book published, he introduced me to the publisher and the rest is history as they say!

MP: Is it true that you wrote it on a BlackBerry mobile phone?
RL: It is yes. I organize my life via my BlackBerry if I’m honest. I have a habit of getting to training at 6.30am, even though we’re not due to report until 9.30am as this gives me the perfect opportunity to have some quiet time to reply to emails, plan my week and in this case, write my book!

MP: What BlackBerry model do you have?
RL: It’s the BlackBerry Bold model. For me it’s essential that I have a keypad, I’m now at a point where I don’t need to look at the screen, similar to those who Touch-type on a keyboard, I can write long emails and texts incredibly quickly, perhaps even faster than I could on a keyboard itself. That coupled with BBM, the ease at which I can use social media and stay in touch with the world made it a no-brainer for me in choosing this phone.

MP: Why did you choose a BlackBerry over something like an iPhone?
RL: For the lifestyle I lead, having to reply to hundreds of emails a day, the BlackBerry makes far more sense. The iPhone is a lot of fun but I couldn’t imagine it enabling me to be anywhere near as efficient as I am on a BlackBerry.

MP: Do you have plans to write another book, and if so, will you be writing it on your phone again?
RL: Yes and yes! I wrote a lot of my previous book while sunbathing last summer on holiday, which made the whole process of writing it an immense amount of fun! As soon as inspiration comes to write a sentence or a paragraph or two I will begin to type it into my notes in my phone. Once finished, I simply email the notes to myself ready to be sent to the publisher, it was such a simple process and one I would happily do again.