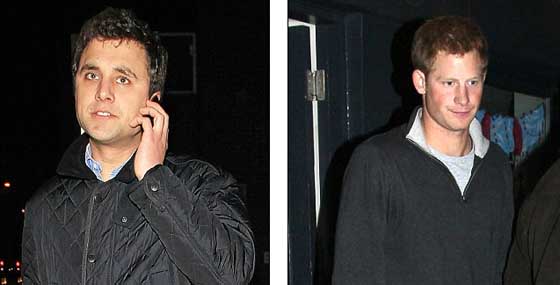 If you were on the phone with your friend, and you heard them get mugged and their BlackBerry taken, you'd probably do all you could to help them recover their stolen device, right? This was exactly the scenario in South-West London this weekend, but the victim -- Thomas van Straubenzee -- wasn't just on the phone with anyone, he was talking to his good friend Prince Harry.


"Prince Harry was aware of what had happened to his friend and drove to the area immediately to try to find him," an aide said. "He circled the streets for a while in his Audi before following intuition and finding his friend at a local police station in Battersea Bridge Road. The Prince wanted to be there to offer some comfort and friendly support. Prince Harry made his way to the station and by the time he arrived the police had already enacted a number of operational procedures, which involved very swift action and the kind of scenes you see on The Bill. Both the Prince and his friend were very grateful to the police for how they handled it."


This is the first time a senior Royal has entered a police station and reported a crime, giving his statement. As for the mugger, he was caught and the BlackBerry was returned to Thomas. Hopefully Thomas had BlackBerry Protect running on his phone, and if not this incident may prompt him to do so. Being close to the Royal family, he probably has all sorts of contact information and messages that shouldn't fall into the wrong hands. Thanks for sending this in Mark!