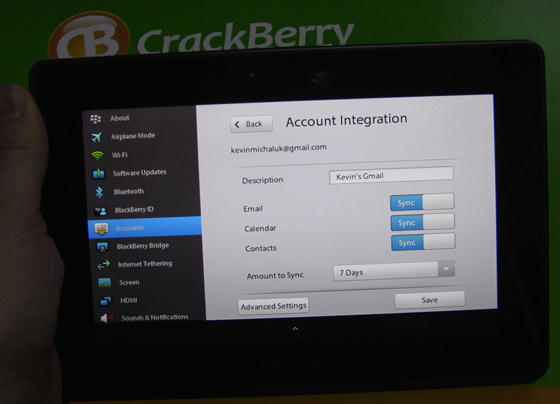 CES 2012 is just kicking off in Las Vegas, and if you've been wondering what Research In Motion will be displaying at the show we now know the answer. While the release date is still set for February, RIM will be showing off BlackBerry PlayBook OS 2.0, which brings with it a TON of long-waited feature enhancements that are going to make the BlackBerry PlayBook **THAT** much better.  In addition to the expected native email and calendar, some other surprises are there, including my favorite - the ability to use your BlackBerry Smartphone as a remote control for your PlayBook. Yes, you can actually use that beautiful keyboard from the Bold 9900 to type on the PlayBook (this was one of those killer features I saw when I was down in Waterloo this past summer). Keep reading for full details and stay tuned to CrackBerry as we bring you back LOTS of hands-on content this week live from the show!

LAS VEGAS, NEVADA--(Marketwire - Jan. 9, 2012) - (CES 2012) - This week at the Consumer Electronics Show (CES), Research In Motion (RIM) (NASDAQ:RIMM)(TSX:RIM) will be previewing new features of BlackBerry PlayBook OS 2.0 that will enable customers to stay even more connected and productive in their personal and professional lives.

"BlackBerry PlayBook is already recognized for delivering powerful performance, true multi-tasking, advanced web browsing and HD multimedia in an ultra-portable design," said Mike Lazaridis, President and Co-CEO at Research In Motion. "With BlackBerry PlayBook OS 2.0 we are building on this strong foundation, as well as leveraging our strengths in communications, social integration and productivity, to allow people to use their BlackBerry PlayBook in new ways throughout the day."

CES 2012 attendees who visit the BlackBerry booth at CES (South Hall 3 Booth # 30326) will get a sneak peek of upcoming BlackBerry PlayBook OS 2.0 functionality including:

Making Your BlackBerry Smartphone and Tablet a Powerful Pair: