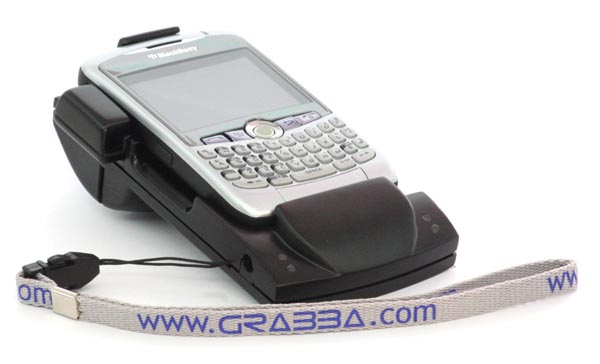 Grabba announced today that they have released their line of data collection attachments for BlackBerry Smartphones. With Grabba, users can collect various forms of data including scanning barcodes, verifying access cards, magnetic strip cards and more. The attachments are available for the BlackBerry Curve 83xx, 85xx and Bold series.

Grabba International announced today that Grabba has released a full suite of attachments to work with the BlackBerry® CurveTM 83xxand 85xx series, and BlackBerry® Bold series of smartphones.

Frank Downes, President and CEO at Grabba, said, "The BlackBerry® platform has become entrenched in fields of activity where there is a requirement for accuracy, immediacy and efficiency in data collection. This has opened demand for special attachments that are the core competency of Grabba."

Grabba® attachments are now available for reading magnetic stripe cards for payment systems, read and write to Contact and Contactless Smart cards, RFID tags and tokens, for scanning 1D and 2D barcodes and combinations of these technologies.

Established in 2003 Grabba has invested heavily in Research and Development and in global business development over the past seven years. This investment has placed Grabba in a position whereby we can now confidently state that we are the world leading manufacturer of attachments for consumer targeted smart phones and PDAs.

Focussed upon enabling the use of hand held computers for interactions with stores of information, Grabba designs, develops, and manufactures all of its products in Brisbane, Australia, drawing upon suppliers of key components and services from across the globe.