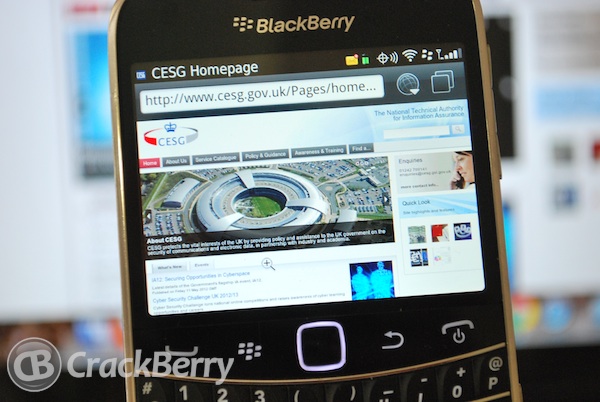 LONDON, UNITED KINGDOM--(Marketwire - May 17, 2012) - Research In Motion (RIM) (NASDAQ:RIMM)(TSX:RIM) today announced that CESG, the National Technical Authority for Information Assurance in the UK, has approved the BlackBerry® 7 operating system for government use. The approval enables public sector workers to utilise the enhanced performance and rich functionality of the latest BlackBerry smartphones available in the UK.

The BlackBerry® Enterprise Solution from RIM is the only mobile solution approved by CESG to protect material classified up to and including 'Restricted'.

Stephen Bates, UK Managing Director, RIM, said: "We're pleased to see CESG taking such positive steps to help ensure UK government workers have access to the latest suite of BlackBerry 7 smartphones. Thanks in part to our industry leading security credentials, BlackBerry smartphones are widely deployed in UK public sector organisations including the Ministry of Defence (MoD), most of Central Government and more than half of the UK's police forces, NHS and local government organisations. BlackBerry smartphones are enabling greater efficiencies and improved citizen service by providing access to data such as patient records, the Police National Computer and other government systems at the point of need."

Using the BlackBerry Enterprise Solution has led to striking savings and improved citizen service across many public sector bodies, including UK police forces who are using BlackBerry smartphones to increase productivity amongst officers and to enable them to spend more time on the streets and less time in the station.

Research In Motion (RIM), a global leader in wireless innovation, revolutionized the mobile industry with the introduction of the BlackBerry® solution in 1999. Today, BlackBerry products and services are used by millions of customers around the world to stay connected to the people and content that matter most throughout their day. Founded in 1984 and based in Waterloo, Ontario, RIM operates offices in North America, Europe, Asia Pacific and Latin America. RIM is listed on the NASDAQ Stock Market (NASDAQ:RIMM) and the Toronto Stock Exchange (TSX:RIM). For more information, visit www.rim.com or www.blackberry.com.