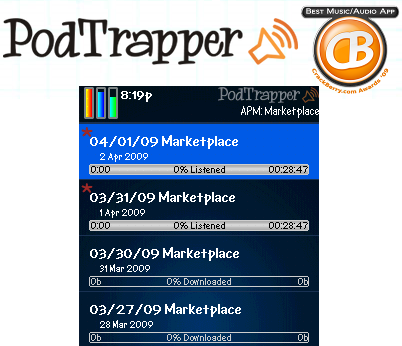 Getting the new year started right, Versatile Monkey have released the latest version of their CrackBerry Best of 2009 award-winning application, Podtrapper. Version 2.6.7 is now available as a free trial or for purchase and has plenty of bug fixes in it to address any previous issues. You'll want to check the changelog for the full list. A quick run down of the major additions included in this update:

While that may not seem to be a huge update for some, the minor feature changes in the application is where it really counts. Some of which was based on OS 5.0 bugs, that have since been cleared up with this release. If you've not used Podtrapper before, give it a shot and find out why it was a user favorite for 2009. And if you're looking for a good podcast to listen to, try giving a listen to CrackBerry Radio. Our 2009 year-end show and first show of 2010 were actually pretty decent!