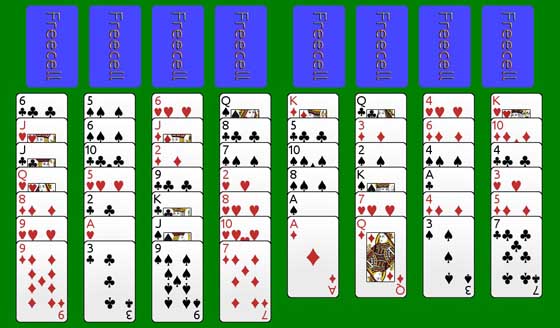 SoloDeck is a collection of solitaire card games for your BlackBerry PlayBook by Chef Delivered Ltd. Included at this time are five games: Freecell, Klondike, Scorpion, Memory, and Gaps. The app has been designed to maximize use of the screen as the play surface. The main screen consists of the layout with the playing cards, and nothing else, just as you might see it on a real table. There is nothing else on the play surface to distract you from the game itself.

Game play is simple and intuitive; you drag a card or cards from one pile to another with your finger. However, if you want to keep track of the game playing time and score, there is an option to place a "score board" on-screen. Using left and right gestures, you can navigate to the Options, Statistics, and Help screens where you can control aspects of the game, view statistics, and link to the developer website for more details and playing guides. You can also get to these screens by swiping down to reveal the app's navigation menu.


The free trial edition of this app is a fully functional counterpart to the paid edition, with one exception: the trial edition closes after each game played, requiring you to restart. If that's not your style, you can grab the paid version for just $.99 in BlackBerry App World.