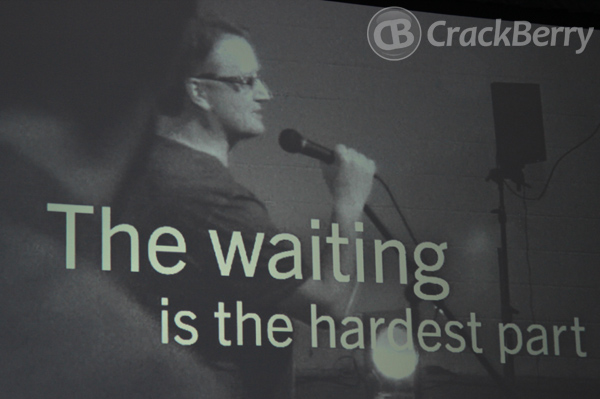 Yesterday when I was at the BlackBerry 10 Jam in Toronto, a couple of us were chatting at the back of the room when a reporter from the legacy news world came up to us asking our opinion of BlackBerry and the situation they are in.

He was a nice enough fellow, although I'm pretty sure he was recording the group's entire conversation without permission. Whatever.

Because I talk too much, as CrackBerry Adam would agree, I volunteered my opinion to this reported. I said something along the lines of how RIM is in a tough position, but they're doing the right things and BlackBerry 10 looks really promising. I pointed towards the middle of the packed room and said, "Just look at all these people who have come here because they see a future for RIM."

He came back with a very specific question, and one that I think is interesting. "Do you think it's do or die for RIM?"

Clearly this reporter felt that it was, indeed, do or die for the Canadian tech giant. What's a guy to say in response to a reporter asking such a question?

I started by agreeing with him. RIM is making a platform transition. Most of the time, when a company makes such a transition, it either works or it has devastating negative effects on the company. In other words, technology transitions are do or die pretty much by definition.

Fail the transition, and it's like failing to cross a burning bridge. You die.

The difference here is that RIM is making a transition a few years later than it should have. The move is in retaliation to a market that changed. It's not a proactive move.

Who remembers when Apple moved from PowerPC to Intel chips? It wasn't that long ago, having been announced in 2005 and completed by the end of 2006. Apple executed perfectly. But what if they had screwed it up? It could have spelled disaster for the Mac maker. Of course nobody talked about it in that light because Apple was doing relatively well at the time.

So sure, RIM can be thought of as being in a "do or die" position. So has pretty much any pure play technology company that went through a major product transition.

Oh, and from what I see from the BlackBerry 10 demos on the dev alpha hardware, RIM is doing.