So you’ve got that new BlackBerry Curve, and you’re looking to accessorize the heck out of it? Then look no further. While many people opt for a more colorful case, a lot of BlackBerry users are looking for an accessory that will increase productivity, and give them quicker access to their BlackBerry smartphone. Today we are taking a look at the BlackBerry OEM holster for the BlackBerry Curve 9360. Continue reading to see if this holster will cause you to move your BlackBerry from your pocket, to your hip.

The OEM holster for the BlackBerry Curve 9360 Is one of those cases that only a small portion of people will use. But if you are one of those people, you will certainly value the use of a holster for your BlackBerry. The OEM holster case has three main features. The first feature is the protection it provides for your BlackBerry smartphone. The second is the magnetic device locking feature. The built in device locking feature allows your BlackBerry smartphone to be placed in a sleep mode or change notification tones while holstered. The third feature would be the quick access. When your BlackBerry is placed into the holster and on your hip the amount of time it takes to check that important BBM is drastically reduced. Now the time reduction isn't a whole lot, but BlackBerry people like to get things done! and this will help you do that. 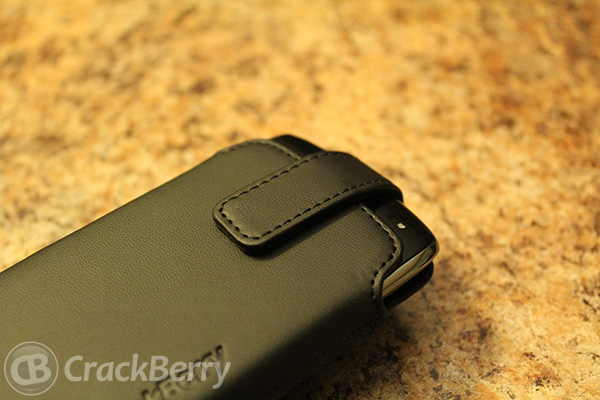 The front of the case features a magnet latch to secure your BlackBerry Curve at any angle. The case as a whole is made of faux leather, with high grade stitching to ensure a long life. The case also allows the BlackBerry smartphone to protrude slightly from the top the case which allows the LED light to be fully visible.

The back of the OEM holster is quite simple. The back features a 360-degree swivel holster with a belt lock. The belt lock eliminates any worry of the case becoming loose and falling off your belt.

OEM holster for the BlackBerry Curve 9360

A sturdy case with innovation all-around. The OEM case not only saves your battery, but also saves you time and eliminates fumbling around for your BlackBerry smartphone.

I found that the OEM holster attracted dirt and fingerprints fairly easily. As well, the case seemed to scratch even with a lightest of scrapes.

BlackBerry people do, and the BlackBerry OEM holster helps you accomplish this. The case features a magnetic device sleep mechanism, belt locking design, and an attractive and stylish exterior. Definitely worth the purchase.