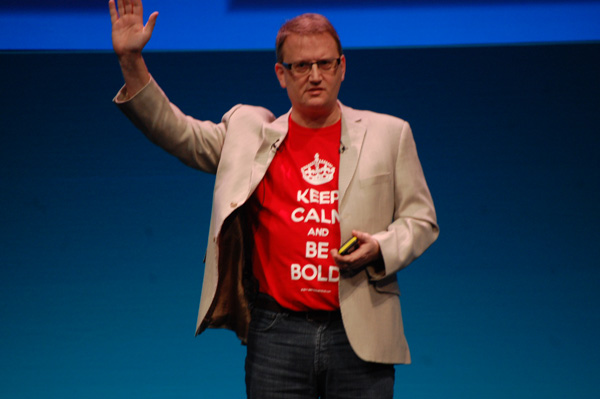 Yesterday evening, Simon Sage brought to our attention an interesting blog post that RIM VP of Developer Relations made. Except this post by Alec Saunders was not on the developers blog. It was a personal post on his own blog. You can read it here.

Much of the CrackBerry team was surprised at the post. In short, Alec was writing an open letter to another small company CEO friend of his in the voice messaging industry. Alec's advice to his old pal was, "It's time to hang up the spurs cowboy."

If you read Alec's entire post, he's basically telling his friend that his main product, visual voicemail, isn't a business anymore. It's a feature. To his friend, the CEO of this visual voicemail service, he writes, "From where I sit, it looks like YouMail needed to pivot five years ago to remain relevant, and you missed the window."

I was, quite frankly, surprised to see Alec blog something like this. It's a pretty public way of slapping someone in the face. We're not used to seeing this from him. He is an incredibly good public speaker and the whole Crack Team really likes the guy.

One commenter fired back with what I can only describe as the elephant in the room: "It looks like RIM needed to pivot five years ago to remain relevant, and you missed the window. "

Ouch! But RIM did need to pivot years ago, and is undeniably very late. I don't think it's clear yet if they missed the window, but it's possible.

I can also see how Alec Saunders would have been a bit offended by the implications of YouMail's blog post, where they announced a discontinuation of work on the BlackBerry platform.

That post, from YouMail (and the CEO's own reply on Alec's blog), suggest that BlackBerry users in the US market are not adopting YouMail. Is that because nobody wants a BlackBerry period? Or is it because RIM already delivers a very good visual voicemail experience on BlackBerries sold via the major US carriers?

I would have thought the latter. But YouMail's CEO seems to be saying that his user base is growing on iPhone and Android despite those platforms having a built-in visual voicemail app.

So, perhaps its time to ask our audience. If you are a BB user in the US, do you like the visual voicemail feature RIM provides? Have you ever used YouMail? What about those of you on Android or iPhone? Besides the friendly face slaps being exchanged by two friends, let's get some opinions from the user base.