I managed to get slightly confused when shooting the above video. For some reason I thought I'd downloaded the game from BlackBerry World - turns out I didn't. There are actually a couple of versions of Piano Tiles in BlackBerry World which are paid, but if you head on over to the Amazon Appstore you can grab it for free.

To be honest, there's quite a few different versions for Android, but the one I have been playing is from the developer umoni. It runs like a dream on BlackBerry 10.

The concept of the game is really simple, yet very addictive. Essentially you have a selection of piano tiles that scroll down the screen and you need to tap the black ones to ensure you play the song. Hitting a white tile will end the game so precision is required.

Where things get spiced up is that there are a bunch of different style games within the game. Some offer you different levels of difficulty and some make life really hard - such as adding bombs or lightning strikes into the game.

In addition you have some sweet options within the settings. You can change the sound, but even better is that you can switch the color theme as you'll see in the video. 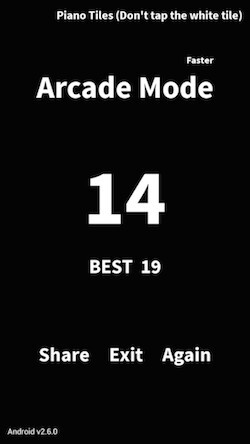 The idea is to complete each level - sometimes in a certain time - but always to see if you can beat your best score. If you do, you'll be rewarded with a round of applause. As you can see above you also get the option to share your score, however, because this is an Android game you won't be able to use the accounts in your BlackBerry Hub. That's a shame, but at least the game is free.

Clearly this one isn't going to be game of the year but it's surprisingly fun. Give it a shot and see what you think?